The Electoral College: Tyranny of The Minority 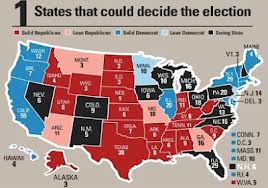 In 2000 I was still over in Saudi Arabia.  I cast an absentee ballot and followed the election on CNN.  When I heard that George Bush was declared the winner and that Al Gore had won the popular vote but lost, I said to a friend "this is going to come back to haunt us".

What troubled me most was that the electoral college had become an albatross around our neck; it afforded just a rare few states the opportunity to determine who our next President would be.  Until the last decade or so that was not so much of a problem.  But political scientists now recognize that increased mobility has allowed for citizens of like political philosophies to live and work in parts of the country who seem more in line with how they themselves live and think.  For example, California, Oregon and Washington State have become so liberal that they now border on the socialist.  Their political philosophies have become alien even to more moderate Democrats who live elsewhere.  A Democrat in Iowa or Nebraska wouldn't recognize the west coast brand of Democratic politics.

Just as the South switched to the Republican party in the sixties, and formed a solid voting block for any Republican, the West Coast has now formed a solid wall of liberalism, from which no Republican stands a chance in hell of winning.  The same has proven true for the Northeast; New York, New Jersey, Maryland, Connecticut and Massachusetts, all solidly Democratic.

So what we now have in America are bi-polar voting blocks which leaves the rest of the medium and smaller states to sort it all out and determine a winner.

The problem with this bi-polar disorder is that now candidates, especially the incumbent, can buy the election.  When candidates had to deal with all fifty states that would not have been possible.  Now, it is not only possible, these states are being bought by the highest bidder.  Obama bought Ohio lock stock and barrel, with $37 billion dollars of our tax money; rather than allow General Motors and Chrysler go through a normal business bankruptcy, Obama appointed a banker and an auto czar, gave half of the company to auto unions, then saturated Michigan and Ohio and Wisconsin with campaign ads championing their "savior".  Sadly, just a month ago Treasury Secretary Geitner testified that the GM bailout will result in a minimum loss of $25 billion dollars to the U.S taxpayer.    So now, Obama can put Ohio and Michigan and Wisconsin in his pocket, all at the expense of the American taxpayer.

When Obama travels through Nebraska and Iowa he walks with confidence, knowing that he cowardly refuses to admit that ethanol subsidies to corn farmers is neither a solution to our energy needs nor a very efficient use of taxpayer money, nor even better for the environment!

Be it Democrat or Republican, the electoral college system has outlived its worth, if it ever had any in the first place.  The electoral college was initially established to give the smaller states an equal say in our government.  But now it has proven possible for a President to lose the popular vote and steal victory from the American people through an electoral college victory.  It has now happened three times in our history and seems to be picking up steam for more occurrences.

Sadly, both of the candidates' election campaigns have more or less ignored 41 of the 50 states, instead concentrating their respective billion dollar campaigns on half a dozen "swing states".  More than likely the folks in Ohio will choose our next President.  That's especially true if one candidate wins the national popular vote but loses the electoral count.  Look at that map up above.  If Obama wins this election he will most likely win it in less than 20 of the 50 states...and it will be Ohio as referee, standing in the middle of the ring to raise the champion's glove.

Understand your point,but what is your solution? Popular vote will simply let the 10 biggest states (population-wise) determine the election. The other alternative is apportion the electoral votes according to district results. In CA, that would mean part of the 55 electoral votes would go to a Republican, a prospect the libs are furious over. They are not similarly upset over the idea of a red state giving some to the lib candidate, but that's the truth that they ignore. Anyway, what is your solution? I am against the popular vote idea for the same reason our founders opposed it: SD, VT, RI, etc. cease to matter.

Randy, I don't have any problem with using just the popular vote. Yes, it's true that California and New York would be the big brutes of the system but take a look at that map; cumulatively the other states more than pull their own weight on both sides of the political spectrum.

And look how it is now? New York and California and Washington and Oregon are being totally ignored now because they are such "liberal whores" that the Republican is just wasting his time trying to compete in them and the Democrats just screw them and leave them lying there, spread legged, and not minding a liberal politician's quick "screw and go".