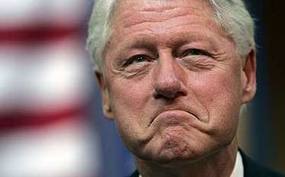 No one has ever accused Bill Clinton of elevating the office of the Presidency.  From Whitewater to Travelgate, to his rape of a campaign worker, to Jennifer Flowers, to his solicitation of oral sex from young White House intern Monica Lewinsky, to his shameless pardon of imprisoned campaign contributors on his last day in office, Bill Clinton put a stain on the Presidency that is unprecedented.

Fortunately for Clinton, half of Americans are so immorally craven that all was forgiven in their minds...as long as that green check keeps showing up in their mail box once a month.  Now, Slick Willie is back in the public spotlight.  He's out campaigning for Barack Hussein Obama, promising America an economic resurgence if only you give Barack another four years.  As with any slick salesman, Slick Willie claims immense success as President.  Not once will Clinton mention that he just happened to be President when Republicans passed Welfare Reform and took away Clinton's big spending checkbook.  Nor will Slick Willie mention that he rode the tsunami of the Internet Boom, which generated trillions for government coffers, and claimed success for himself.

Not satisfied with the stains he placed on the Oval Office, Clinton now stains the pristine traditions of "ex Presidents".  Traditionally, ex Presidents retire to the state of "elder statesman".  Our former Presidents stay out of political campaigns, stay above the fray of political infighting and satisfy themselves with establishing their Presidential library, writing books and attending foreign state funerals.

With the exception of Jimmy Carter, other Presidents have gracefully left the public scene and lived fruitful, productive lives and have willingly departed from partisan politics.

But Clinton is a political junkie that can't live without his "fix".  He must bask in the false glow of a fictional success that never existed.  He must stand at the podium and twist facts and figures to fit his own personal image of himself.  So, like the immoral political whore that he is, Clinton is out making speeches for Obama.  But not really.  Just as a heroin addict must have his daily fix, Clinton has to keep popping up on campaign stages and telling tales that were never true.

If Slick Willie can avoid still another "babe" scandal, win or lose this campaign, he'll be back again in 2016, still basking in the pseudo success that only his degenerate followers believe in.  He has to.  He's the ultimate political junkie that can never be rehabbed.

Posted by A Modest Scribler at 5:52 AM