Do you know how to tell when President Obama is lying?  When his lips move.  Witness the never-ending press conferences where he comes out, earnest look in place, and says he wants to work with the opposition to get things done.  How many times have we heard that lie?  His first lie went into effect when the Dems started the spending orgy with the $800 billion dollar "stimulous" bill that funded rat parks and Acorn and all manner of non-job creating projects.  The second time was when the Obama/Pelosi/Reid regime dreamed up Obamacare behind closed doors, then denied Republican input or amendments and then rammed it down the American people's throats, even as every town hall meeting said "NO!"

The list goes on and on; Obama circumvented the Congress to dictate his socialist edicts through his appointment of 40 or "czars".  Now Obama is holding an immigration summit.  Look who's invited:  every liberal in favor of granting amnesty, to include Bloomberg and Al Sharpton and a couple of dozen spanish language TV broadcasters and executives.  To "doll up" the place he also brought in Eva Longoria for her outstanding expertise in immigration and foreign policy.   Notice you don't see one anti-illegal immigration representative.

Obama again ignores the fact that over 70 percent of the America people are against illegal immigration.  I guess he has figured out that he's already lost middle America and his only re-election chances lie in the Hispanic vote.

In the last two and one half years I wish I had a nickle for every time I've heard the phrase from our citizens:  "Fool Me Once, Shame on You, Fool me Twice, Shame on Me".  I think most of us have had quite enough.

The only immigration initiative I want to see is Obama returning to his father's homeland.  He's shown much more affection for foreigners than he's ever show for the American people. 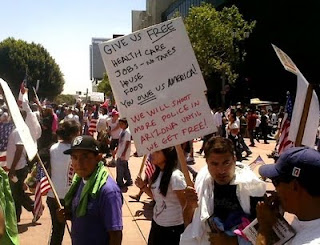 Posted by A Modest Scribler at 1:18 AM

I just switch to a different channel and say to myself, 2012, 2012, 2012, when hopefully we will finally be through with this barackacy.

Just can't stand having a black in the WHITE House, can you?

Just run whoever you want in 2012. We libs will just laugh our asses off at you.

You reich-wingers have nothing except lies.

"Lost in America" pretty well sums up the conservative philosophy these days.

Hmm...took you three posts to let us know the following: 1) You believe that anyone who opposes Obama is a racist, yeah, heard that before...2) Re, you will laugh at whoever we put out there...yeah, you laughed at the tea party last year and they sent Nancy to the back of the class..3) re, Lost In America sums it up...not quite..you forgot the other part of the blog name..Just Common Sense...Something libs have never had. Thanks for your three posts.

Please look at both sides and come to a decision before voting. Don't just look at skin color then pat yourself on the back for being sooo open minded. You owe it to your country to learn what Socialism and capitalism are then then read the childrens story about the ant and the cricket. If your not at least that educated; you have a moral duty NOT to vote. Yes, voting is a right. However, showing up is not voting.

Anon; this is simply liberal-speak. You offer nothing in opposition to what I said. Obama, Reid and Pelosi did nothing but bully everyone, including the American people, when they held total power. You offer nothing in defense of open borders and illegal immigration. In fact..you offer nothing....but then that is so typical of a liberal; mouth platitudes and repeat the liberal mantra, and finally, take no responsibility for anything that happens.

Anon you stated in your post that "reichwingers have nothing except lies." Well news for you libby, ALL I've seen out of politicians,since Kennedy, Republican,Democrat, conservative,liberal, whatever is the same mishmash of Machiavellian horseshit. That you seem to think that liberals are so holier-than-thou just proves what a nonthinking liberal sheeple you are!! Buy that line, and I have some ocean front property in Tora Bora than you would just love!!!!

BTW, as far as Obama is concerned, I couldn't care less whether he is black,white or zebra striped. A forked tongue is a forked tongue. "Meet the new boss,same as the old boss".