"No Amnesty; You Weren't Invited To My Home" 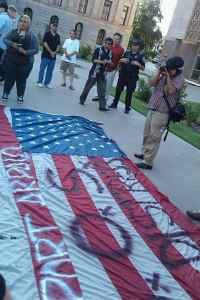 Note to Readers:  I apologize for any inconvenience you may have had in viewing and/or posting to my blog for the past 36 hours.  The Google Blogging system was inoperable due to a glitch which occurred during periodic maintenance.

Each time I watch a news show and see illegal Mexicans up in arms because the President has failed to keep his promise to legalize them, I get very angry.    Noted, this issue has been discussed from all angles.  Democrats and even some Republicans try to justify the illegals' presence here by saying "we can't deport them all".  I say Bull Hockey.

Of the 120 or so blogs I have written here, I would guess that at least a quarter of them have dealt with the specific problems that illegals are responsible for.  I have also offered plausible and logical solutions for ridding this country of the illegal element.

The illegal communty is blaming President Obama for not keep his promise to legalize them.  I say, "welcome to the club", he broke a lot of promises and illegals would be wise not to count on him keeping this one.  I still assert that there are enough of the American people who oppose illegal immigration to punish any politician who tries to grant amnesty to illegals in any form, to include the Dream Act.

It is high time for the American people to be pro-active.  We no longer have the luxury of waiting until some hair-brained Kennedy-McCain Amnesty bill raises its ugly head again.  We need to boycott businesses that knowingly hire illegals, we need to be clogging up every legislature's email box with letters demanding that illegals be deported immediately!

Bring our troops home from the Middle East and post them at the border, with orders to shoot unlawful border crossers,  and augment ICE in sanctuary cities, round them up and bus them to the border.

So, Eva Longoria and all you Open Borders/Blanket Amnesty supporters, you have a wake-up call coming.  America is mad as hell and we're not going to take it anymore.  Past amnesties only encouraged further invasion.  We've been polite enough for too damn long.

Leave My Home!
Posted by A Modest Scribler at 9:03 AM

I'm all for an illegal immigrant "holding area",say,walling off Death Valley and air dropping in minimal supplies. Let them fight for the neccessities of survival until their deportation bus arrives. Let's if that will cause them to leave in droves and stay on their side of the border.