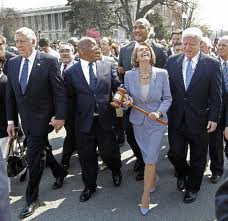 The above photo was shot on the day that Obamacare was rammed down the American people's throat.  Democratic House members were walking from a meeting at the White House back to the House.  Any who watched that day could not have failed to have seen Pelosi's near orgasmic delight in passing a bill she admittedly hadn't read, that adds more trillions to our national debt, and against massive opposition from 70% of the American people.

Note the strange ferrying of the huge gavel that she strangely felt she should carry around in transit to and from the White House.  At that very moment Pelosi was the most powerful woman in America.  What does it say about a woman who would deflate like a balloon if all the Botox was removed, that she had to carry around a huge phallic symbol as evidence of her power?

Maybe it says that perhaps we have not advanced the liberation of women as much as we had hoped.  I thought for sure that recent statistics proved beyond all doubt that women have achieved equal footing in our society.  National college statistics show more women are completing a college education than men.  During the current recession the National Labor Bureau is reporting that women are keeping their jobs even as men are losing theirs.  Federal Title 9 mandates that women's collegiate sports teams must be funded, even if the programs don't draw enough spectator revenue and even if the costs involved forces the cessation of men's sports programs.  Even the majority of social safety net programs are designed primarily to benefit women.

How is it then that we have the most powerful woman in the United States feeling that she must wield an over-sized, almost phallic, gavel to prove she's "in charge".   Was Pelosi so insecure that she felt a need for artificial "power devices" to hold her own?

If the most powerful woman in Congress feels the need for such artifice what does that say about the average female worker in America?  Are all women feeling the need to wield the phallic challenge?

The gains made by women in the workplace and in our society over the past forty years has been truly astounding!  I personally would like to see a woman conservative elected as President!  But, for god's sake, how much is enough?  While I'm sure most women have no designs on our "uniqueness", a certain circle of women do indeed seem to want to castrate the men and wield the "results" for all to see.  Must we men surrender our penises to women as well?

Then again, perhaps I'm all wrong about this; I saw the Current Speaker of the House, John Boehner, take that huge gavel from Pelosi on the day he was installed....and he seemed to enjoy wielding it as well!  Maybe it's just a "power" fetish of which both parties are guilty.
No matter,  let's call a truce; we men will allow you to keep what is rightfully yours and you allow us to keep what is ours and "Viva La Difference!".  For now anyway...after all...in an earlier blog I admitted "In Fifty Years We'll All Be Chicks".

Posted by A Modest Scribler at 1:07 AM

I am a long-time feminist. But my feminism has evolved with changes in society and a lot more life experience than when I was 17. Women are losing their jobs at a slower rate than men because women make less, even at the exact same job. This is a disservice to both men and women. Employers will pay less when they can. Equal pay for equal work protects men from being shut out by cheaper labor. However, it has to be equal work. I do not support women comparing ordinary jobs to jobs that get higher pay because they are hazardous (areas that have much fewer women) or require a higher or unique skill level that the woman (or person for that matter) is complaining pays higher. The pay should match the job, not the gender. And I do not support "lowering the bar." If a particular woman is competently qualified to be a police officer or fire fighter, great! If not, I don't want to put the lives of my family in the hands of someone not qualified for the sake of "equal rights." I am all for women choosing to be mothers. This society could use a lot more good mothers. In that arrangement the husband is responsible for supporting the woman and their children even if he later decides he'd rather run off with some young thing. It is not fair to throw a homemaker with no "work" experience out into the job market after 25 years and just let her sink or swim. I am happy when women have choices, when they can get work and not have to stay with an abusive husband or when a woman with children is suddenly widowed and at least can get work to support herself and her children. I want the ability to think for myself and to support myself. I'm very lucky to be married to a good man who doesn't think women are second class citizens. I'm no fan of Nancy Pelosi, however, no matter how big her gavel. jo

Well said, Jo...this particular blog entry sat for awhile because I didn't want to come across as a neanderthal male who wants "the little woman" in her place. I was just so angry at seeing "nancy" parading around with her gavel; a symbol of a "power" the American people didn't give her on the Obamacare bill. It's almost as comical as seeing men "compensating" with big guns and big cars. I'm not familiar with pay rates for women or men so I'll take your word on that.
And I guess what also makes me angry is that Pelosi defeats the whole idea that women in politics are more rational human beings and do a better job of it.
Give me one rational female candidate for president (who is not a clown) and I'll vote for them over a man every time. (Not Palin, Not Bachman). I've always admired Kay Baily Hutchinson and thought she would have done well as President.
As to abusive husbands and the career challenges of single women, Jo, you have read my blogs, including the personal ones; I lived through all of that as I watched my mom trying to persevere, work and raise a family as a single woman.
Thanks for your comments.

JCS, you did not come across as a Neanderthal at all! I think we're pretty much in a post-Feminist era here in America. We've gained equality in that we can elect idiot women to office as easily as idiot men, unfortunately. Women have not been in the senate, as governors, etc. as long as men and it will take time to produce really good female candidates for President. I believe in working your way up and gaining experience. I like Kay Baily Hutchinson also, by the way. I want the best person for the job, regardless of gender or other non-essential characteristics. Too much is at stake. I thought the huge gavel thing was ridiculous, personally. Thanks for another thought-provoking blog. jo