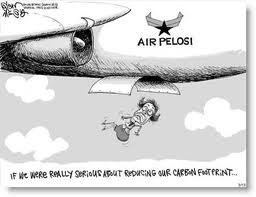 For two years Congresswoman Nancy Pelosi opined that "the oil men in the Whitehouse" was the reason gas prices were so high.  This did not prevent her from making 85 trips at taxpayer expense during her last year as Speaker of the House.  The U.S. Air Force expensed the cost out on separate expense line items and reported the cost to taxpayers to ferry Pelosi and her friends and family on weekend jaunts to San Francisco.  The expenses totalled $ 1,285,362.00 dollars.  An additional $86,000 was spent for food and alcohol.  ( Judicial Watch  December 2010, Volume 16, Issue 12.)

Other taxpayer expensed items prove that our former Speaker had expensive tastes:

Note:  None of the above listed "refreshments" was offered to our military troops in Iraq since they are not allowed to partake in alcohol while serving in a Muslim country.  This luxury is reserved for our honorable public servants.

Also, regarding Pelosi's assertion that oil prices were high because of the "oil men in the Whitehouse", Pelosi failed to disclose that she and her banker husband own more than a million dollars in stock in a California Natural Gas company (Clean Energy Corporation) which has received favorable treatment by Pelosi during her congressional service.

Somehow last November the American people decided that Ms. Pelosi needed to be "grounded".  Now that she is no longer Speaker, her air travel is limited to a choice between Southwest Airlines or "broom". 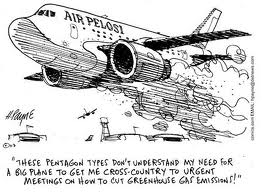 Posted by A Modest Scribler at 1:52 AM

Lies, hypocrisy, deceit, and fraud. Machiavelli is laughing in his grave. This decadence will be the fall of our Republic. America sold to the highest bidder.

It makes me so sick the way too many of our elected representatives give themselves elite privileges and perks (especially with the economy the way it is!) and then have the gall to say "we need to raise taxes!"
jo

They should all fly economy. and stay at the Days Inn. and pay any upgrades should they so desire.

...and they have the nerve to go for re-elections..over and over

^ Stop crying you weaklings. You will do nothing to solve the problem anyway. Come the next election I'm sure you brainwashed sheep will vote for obama again because its what fox and msnbc told told you to do.

You know what you do? You stop paying taxes. Why pay for these people to live these ridiculous lifestyles? Because you are weak indivuiduals who think you are free but too weak to stand up to the tyranny that which is the federal government.

No, instead you fools enlist in the armed forces because you want to "serve your country" and "fight for freedom". LOLOL

Tell me this, how free do you feel in this nation when you are forced to pay taxes so people like nancy pelosi can stock her airplane bar and fly all over the world? Yeah, you're real free alright. Your're free to go to work and bust your hump so that the IRS can take 35-40% of your paycheck to waste on government and illegal aliens.

Serve your country, pulease, the only thing the armed forces are serving these days are congress' ability to walk all over us.

You want to help your country? Do NOT join the government. None of it. Start your own business and try to work for cash. Starve the system. Use the barter system, trade goods for goods and services if you can. Boycott any and every company that hires illegal aliens. This is not about race, this is about protecting yourself and your country from domestic AND foriegn enemies.

Or you could just keep drooling while you stare into the tv.

Now get back to work slaves! No one said you could take a break.

Anon I have done that and much more in protest of the decadence into which our government and society have fallen. But I take high offense at being labeled a "fool" for joining the military. My time in the service has given invaluable insight and training that will serve me well when the shit hits the proverbial fan. I had the privilege of ridding the earth of some scum, and providing freedom to some oppressed. So watch what you say and to whom you say it, you never know whom may be listening.

Grenadavet; pay no attention to anon of the wild ravings. He's been posting since I started my blog. Most of the time I have to delete him for extreme vulgarity or threatening to do violence. Of late, he's been careful to skirt the edges of civility but he is just venting. If he thinks so little of us conservatives, just imagine what he thinks and says about liberals! Don't get into a P*****ng contest with him; it only encourages him.