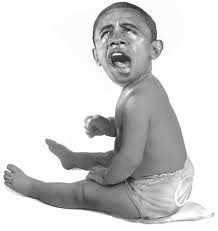 Despite my antagonism against any politician catering to illegals for voter support, I couldn't help but be bemused by President Obama's recent trek down to El Paso to, rather than kissing babies, opting to kiss Hispanic "behinds".

Obama knows full well that, in order to legalize 30 million illegals, he'll need the approval of Congress.  The last time I looked Congress was in session in Washington, D.C. and not El Paso, Texas.   Rather than deal with the issue with the House and Senate, Obama has opted to "throw a tantrum" down in Texas.  As I wrote in an earlier blog, "Obama, Naive Child of Wonder", Obama continues his "child-like" Presidency.  We need only go back to early in his term when he ceded leadership to Reid and Pelosi to implement the massive and fraudulent and ineffective trillion dollar "stimulus" program.  Further, as he sat in the Oval Office "playing President" Pelosi and Reid hammered out a 2,300 page healthcare bill that did nothing to improve the efficiency or cost effectiveness of our health care system.

When really pressed into a corner, as Obama was after failing to act after the BP oil spill, Obama finally flew down to the Gulf Coast, rolled up his trousers, walked along the beaches and railed against the entire oil industry, guilty and innocent alike.  Gathering up his courage and inspired by an old Reverend Wright diatribe, Obama threw a tantrum in hopes that Americans could see that he was "feeling their pain".
He then stomped back to Washington D.C. and, in pouting petulance,  stopped all off-shore drilling, even for those oil companies who installed the latest, technologically advanced capping systems.

Now, Obama is frustrated by all the Hispanic backlash because he failed to keep his campaign promise to legalize the invaders in his first year in office.  Rather than having an "adult" discussion with members of Congress, Obama, in keeping with his child Presidency, flew down to El Paso, and in his best community organizer voice, screamed out a tantrum while ignoring every negative point of illegal immigration.

I, personally, can't wait until we once again have an "adult" in the White house.
Posted by A Modest Scribler at 1:48 AM

*Sigh* An adult in the White House. We can only hope! jo

Why would you blame a man that has been in office for two years for a condition that has existed for at least the last thirty years?
After all Immigration reform MUST be passed by congress and our State of Arizona has two senators one McCain that has been in Washington now for almost thirty years, Kyle about twenty-six years.
How about adjusting your common sense and putting the blame where it should be!

Think you missed my point all together, anon...I don't want immigration reform...I want our laws enforced and I want the illegals to be deported. We don't need any more immigration laws; we have them already...and Obama, has chosen not to enforce the laws already on the books. You need to read more than one of my blogs before you assume I don't understand the problem.

Uhhhh, Just, wouldn't rounding them up and shipping them out be immigration reform? How about some real radical reform-keeping them out???

My whole point, grenadavet; "immigration reform" is just code name for more amnesty. Plenty of laws already on the books that says they're illegal.