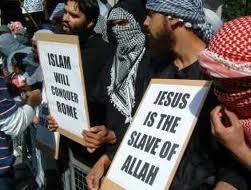 In several of my earlier blogs I warned against naive optimism about the so-called Egyptian "freedom-fighters" that ousted Hosni Mubarak.  I cited the insight I received during my ten years of living in the Middle East.  I voiced the certainty that democracy is not possible in a Muslim culture and that a benevolent Muslim theocracy is the best we can hope for in any Muslim society.  This is why I argue so vehemently against wasting the lives of young Americans and our national treasure trying to democratize and nation build in Iraq and Afghanistan.

Never the less our President and a whole host of senators and congressmen from both sides of the aisle continue to boast of "freedom outbreaks" in the Middle East.  They point to the riots in Tunisia and Yemen and Qatar and Egypt and all the other Middle East nations as evidence that Muslims want "democratic freedom".

Now, in the headlines we see Egyptian "freedom-fighters threatening Egyptian Christians with violence as they burn their Christian churches and chant "we will defend you, oh Islam!".

How is it possible that so many can be so stupid and naive?  The wise guy analysts on nearly every news network have been trumpeting the "birth of democracy" in the Middle East.  Our diplomats and ministers and congressmen and our President are hailing the wave of freedom sweeping across the region.  Really?  Can no one distinguish political and cultural unrest from freedom movements?

America's "wise men" even go so far as to say the region has turned its back on the Taliban and Al Quaida.  Really?...and if so, how is that so important when there are a hundred other extreme Muslim groups poised to take their place?  Witness the Muslim Brotherhood in Egypt who are now clamoring for the seat of power and re-newing their pledge to take any measure to spread the word of Islam and to defeat the West!

Must we go back 800 years and re-study the Crusades before we learn that Islam and Western democracy and culture do not mix well?  Can't we learn from the half-century of efforts we have made to bring Peace between Israel and the Palestinians...and know that it is a culture and religious clash and not an economic one?

Now, the West, through NATO, has chosen to take sides against the despicable Qaddafi and never question the political or religious or cultural aims of the Libyan rebels.  Yes, almost certainly, Qaddafi will fall.  Knowing that, shouldn't the West be demanding certain commitments from the Libyan rebels; say, for instance, you promise to swear off holy wars, you promise to install a corruption-free government, and you promise not to persecute those whose religion is different than your own?  Shouldn't we be demanding something from these rebels before we expend vast treasure in military arms to enforce a no-fly zone and, far more, for actually conducting a massive air war?

I guess in the long run all of this waste is of no consequence.  Our massive national deficit will soon mandate bringing our troops home and let these "freedom fighters" determine their own fate.  We've invested over a trillion dollars in Iraq and Afghanistan alone, not to mention hundreds of billions of borrowed dollars to give to other countries in the region in the form of military assistance and economic assistance programs.  Within a year or two we'll be forced to cease and desist from "nation-building" because China and Japan are going to stop buying our bonds and we'll be in virtual bankruptcy.

We will then be taking on a new form of nation-building...our own.  And, alas, it will be building from the ashes.
Posted by A Modest Scribler at 1:21 AM

Those so-called "freedom fighters" in Egypt didn't seem to appreciate the irony in their horrific assault on one of our reporters. They can all go to hell. Just sayin' jo

Thanks for your comments, Jo. In an upcoming blog I'm going to write in more detail about the muslim mindset; not all bad, some good. Basically, it's a discussion of my conversations I've had with both the working and educated class of muslim. It's the kind of insight you get from muslims who won't talk the same way to a diplomat; perhaps that's why our State Department is so wrong-headed about solutions in the Middle East.

Once again,just, you and I are in complete agreement. I spent a tour with the MFO in the Sinai, and I realized in short order that the mindset of these people was as different as if from another planet. When the fooforaw started in Egypt, I told all those that were spouting how great it was that the Egyptians were "fighting for democracy" to wait and see where it went. And, VOILA!!!! Another Middle Eastern country falling back to fundamentalist Islamic theocracy!! When will our bright boys in the White House learn!!!?? NEVER!!!!

BTW how about the Syrians and Yemenis hey?? Israel is shortly going to slap in the middle and then where will we be??

Grenadvet; in my earlier post to Jo I referred to an upcoming blog about my experience in the Middle East. I'll offer a little preview here: I was good friends with a high-ranking Saudi Air Force officer. We were speaking about Kosova and he made a telling statement. He said "my friend, there is one thing that an American will never understand; our religion overrides any other consideration, social or political. We will alway ally ourselves with our fellow muslims, no matter what our differences are, against a Westerner." Give the Middle East another 50 years of exposure to Facebook and Twitter and other open media and, perhaps, that mindset will change...but we need to quit wasting trillions of dollars, and countless American lives, to try to change it in the short term. Thanks for your comments.

I want to find an island, a small piece of land where there are no humans, and I want to go and live there. Maybe I'll take one or two females with me (crazy idea?). Humans are a disappointment and whoever or whatever created them surely was on dope that day.