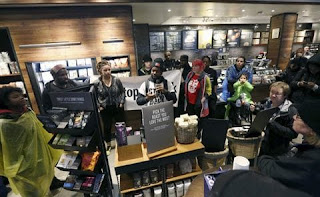 The other day I was out running errands and listening to National Public Radio.  The segment I heard was about Starbucks' bias training being administered to the thousands of stores on May 28th.  Initially skeptical, as I listened to what subjects were being covered, I changed my way of thinking as I heard about one segment of the training that seemed most cogent and poignant and ran true.  The guest was talking about how difficult it is for Black men, at just routinely walking into a convenience store.  Several testimonies by perfectly law abiding Black men were especially touching.

"When I enter a retail store I purposely keep my hands out of my pocket, and visible to the store clerks. I do not want them thinking I'm stealing something."

Another young Black talked about the constant self-imposed vigilance they must exercise to convince Whites that they mean them no harm.  That kind of "self-vigilance" creates a constant tension inside.  These poor good people have to carry around a burden that most people don't.

That "self-vigilance" was illustrated quite well with those two young Black professionals in Philadelphia, the incident that created the stir in the first place.  Just there for a business meeting, and while waiting for a third party to arrive, they had not placed an order and put an idiot store worker on immediate alert.  What happened as a result was both tragic and telling.

I feel sorry for the preponderance of good, law-abiding Blacks who have to bear the burden.  Obama, who rarely said anything really true, was right when he talked about Whites crossing the street when seeing Black men ahead of them.

So how do we resolve this problem?  Sadly, the tens of thousands of mostly Black urban thugs have caused the vast majority of this problem.  We read literally thousands of incidents of these thugs looting stores, either in every day occurrences, or in hyper mode during those infamous urban riots.  If the Black thuggery are not maiming and killing, they are looting for their sustenance.

So, when the "good Blacks" get out in public, thanks to their thug brothers, they must bear a greater burden.........the burden of proving they are harmless.

This is all very sad...made sadder because I have no idea how we solve this problem.  Perhaps folks can show a bit more patience.  Perhaps we can impose a "thug tax" on the thugs that make this a problem in the first place....maybe add an extra two years to a prison sentence for staining the reputation of their collective race.  And I am absolutely sure if Black folks spoke out more against these thugs they'd be better off.  Far too many blame the police in these criminal encounters, refusing to put the blame where it belongs.

While I believe Starbucks' declaration of a national day of training appears a bit staged, kind of a parlour trick to ease Black anger, I am at least pleased that at least one segment of that bias training might have given coffee workers a bit more to think about.

We all need to think about ethnic burdens that we don't have to endure.  If America was smart she would worry far more about the general Black citizenry, and far less than the Black dregs the police have to deal with on a daily basis.  Villainy should have no color.

This is not just a "Black" problem. Muslims have the same issue. We have painted them with the same broad brush. Even the Police have gotten a bad name. Only takes a few Idiots to blemish a whole Race, Religious Sect or group. Conversely, up here in Sonoma County we have a LOT of diversity and we seem to get along just great. There's going to be incidents such as this Starbucks thing but if they didn't sensationalize it, it would just go away. Media's trying too hard to make a point and keeping the pot stirred.They are doing the job once owned by the likes of Jesse Jackson and Al Sharpton. So, as long as the pot stays stirred, we'll never see that things have gotten better.

While other minority groups have these problems they are to a much smaller extent. All one need do to understand the Black problem is consult the "thug index". That's the process of reading a news story, reading the specifics of the crime, without the suspect being identified, and your first inclination is that the miscreant was a Black urban thug. And, sadly, most of the time you are right. Just read the Justice Department's own stats on ethnicity of criminals charged......or the representation of Blacks and Hispanics in the prison system. It's hard not to generalize when the vast majority of our problems come from one or two ethnic groups. But we do need to try and generalize less, and minority communities need to start throwing stones at the ilk who give them a bad name.....and stop giving them a pass by condemning the police.

It permeates all aspects of our nation. In law school (a top 20 school), I had a black friend in our study group (all of us were in our late 30's and ex military). He told us of how people looked at him as being an affirmative action admitee and it really irritated him. His father was a successful criminal defense attorney and this guy was the furthest thing from an AA admitee as anyone could be (although we did have a few of them in our class). Frank is correct - it only takes a few to create the stereotype. That said, the reflexive knee jerk to bend over packwards to correct a mistake also reinforces the stereotype that all whites are racist.

Randy, you raised a whole new bushel baskets of things to think about. God, yes, those racial quotas are now pure poison...causing resentment all up the line for those not similarly blessed. And, yes, rather than talking sensibly about how the racial tensions grew, we have far too many liberals falling to their knees in sheepish worship to an entire race of people........too many of them undeserving of that worship.