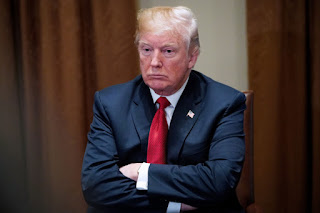 "Trump....The Drunken Sailor Who Demolishes The Bar"
My wife, Dam does not read, watch, or listen to the news. Any news she gets she gets through the filter of a customer who's sitting in her salon chair. Thus, the quality of her news sources are always suspect.
I do not watch the news either. I've found that I have to sift through all of the right wing or left biases so much I just read the news on seven news sites each morning, then do my own research on what's being reported. Sometimes that research takes a lot of time...perhaps five times greater than the time it takes to hear a blip on a news channel. But at least, when I've researched the issue, I know far more about it than the average citizen, even far more about it than the talking heads on the news channel.
I am always reluctant to pass the results of my own research on to Dam. It simply gets too complicated since Dam has not educated herself from point A to point M, and I'm try to discuss point R. Too tiring.
Yes, one day last week, I felt patient enough to pass along a few of President Trump's most recent adventures. I told her about how Trump had managed to bring Fat Elvis, over in North Korea, to the table for talks, even as three past Presidents had failed miserably in doing so, even with their old school diplomats and with their best manners.
I told her about Trump's revolving door cabinets and his horrendous treatment of his own attorney general.
I recited some of Trump's most audacious morning tweets.
I related to her half a hundred of the liberal media's attacks on Trump and his family, including the divorce rumors with Mellania because she chose to mend from medical ills in private. I told her about the million personal attacks on Ivanka when she posed for a Mother's Day picture with her child.
I related some of the most inconsequential attacks on Trump..about his weight, about his Quarter Pounder and fries lunches, about when he hosted a press dinner at the White House and the scribes went back to their newspaper offices and TV stations and complained that Trump got two scoops f ice cream to their measly one.
I then went into my "Energizer Bunny Trump" impersonation, pursing my lips as small as they could get, then reciting as best I could some of Trump's Twitter attacks on his liberal enemies. At this, Dam burst out laughing, encouraging me to do more of them, sometimes both of us laughing like hyenas over the ridiculousness of both left and right.
So Dam says "I like Trump. I like that he's not like anyone else. I like that he is defending American workers by attacking the unfair trade laws. I like knowing that, though he talks rough, at least he's not the typical smooth talking politician that's lying to you."
How could I disagree with that? There are tens of millions of Trump supporters who, tired of the same old politics, tired of the same old games....whether it be immigration, or trade, or foreign relations, or taxes, like the idea that Trump is so simple that they at least know what he's thinking.
As for myself? I yearn for another Ronald Reagan. But President Reagan is dead. I long for a conservative President who can speak intelligently, think complex thoughts, be more polite, be a bit more likable. But we ain't got that. We've got a small army of Republicans In Name Only in Congress, the rest of the seats filled with outright socialists...men and women who set their moral compass by the latest political poll.
So we've got Trump, the adulterer, the philanderer, the guy who has the attention span of a five year old. And Trump is the drunken sailor who went in and tore up the bar.
Except the bar needed tearing up. America got too nice. We've allowed 30 million illegal invaders to come here, then we succor them with generous welfare programs. We've doled out foreign aid to folks who hate us. We've sacrificed millions of jobs to unfair trade laws, we've said "that's okay" to half of the world who kicked us in the shins.
And now "drunken sailor Trump" is throwing America's vast weight around. He's saying no more money to those who hate us. He's saying he's willing to start a trade war if other countries won't play fair, including our NAFTA partners, Mexico and Canada, who have, for years, been a conduit for Asia and Europe to exceed trade quotas by running them through Mexico and Canada, as efficient as a Mexican drug cartel.
I hear Canada's pissed about Trump's throwing up tariff's on Chinese steel being passed through Canada. Or Korean autos being run across the border from Mexico. Yet both of our NAFTA partners have been gaming us for years. Go look at how many roadblocks Mexico throws up against American exports to that country. Go look at Canada's 300 percent tariff on American produced cheese and butter. Hell, Canada is a tariff mecca! Canadian provinces even throw up tariffs agains each other!
So, for now, I'm going with "the drunken sailor". I like my tax cut. I like my conservative Supreme Court Judge up there on the court. I like that Trump's making millions of illegal Mexicans nervous. I like that Trump brought Fat Elvis to the table with his extreme sanctions on North Korea. And I like that he's given the rest of the world a hissy fit over their unfair trade barriers.
Cold beer anyone? I think the beer cooler is the last thing standing after Trump wrecked the bar.
Posted by A Modest Scribler at 1:30 PM

Said it before: Trump, warts and all, is far better than what's her name. When I voted "R", it was a vote against her and the damage she would have wrought.

Yep. I too had to overlook a lot of warts. Hillary was cancer.

Just finished a cold beer. I enjoy watching how people spin out of control as Trump pulls their strings.

Yep, Craig. It's quite a fun circus that's got those old Washington heads in a spin.

Funny...people keep thinking President Trump is 'simple.' That's exactly what he wants them to think. He lets the public-and his opponents-underestimate him while he gets more done than any of the meat puppets who've occupied the White House over the past three decades.

You ain't seen nothing yet. Wait for it.

Well , Wraith, we'll have to see. If Trump is more complex than his behavior and speech implies let's give him the Oscar for Best Actor. Meanwhile, I'll continue to hope he stumbles to more successes....and I'm enjoying the grand shake up of that corrupt nation's capitol.

I think he'd get an Emmy, not an Oscar but who's counting? He's the breath of fresh air I had hoped for when I voted for him. He's a Master Manipulator. He's played this "game" all his life, so it's "childs play" when dealing with the Liberals and the world. At the moment, the only REAL mistake he's made is Jeff Sessions. That will be rectified and probably real soon. I love watching You Tube videos of the Liberals crying in their beers on election night and it's been downhill ever since. If I'm in a bad mood, I just bring one of them up on the computer and the world is good again. I think you're finally seeing the "light" 60 million people saw in him, Scribe. I know you'll still be cautious, but there's nothing wrong with that. Politics has become fun again after the Bush/Obama dreary years. Change Barack? You don't know what change is. We do now.....

Have no disagreement with anything you said, Frank.....except for Sessions. Sessions had no choice except to recuse himself from the Russia probe, since he was a member of Trump's campaign staff. Sessions has been a steadfast supporter of immigration enforcement and is doing a fine job of rounding em up. Trump is not an attorney and is totally out there on the legal implications of Sessions not recusing himself. Sessions was for border security when it wasn't cool....long before Trump began talking about it. Trump has treated Sessions horribly, but knows if he tried to fire him he would lose a lot of support. There are folks out there trying to save Trump from himself...thank God.