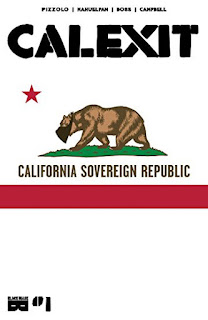 A Few Things To Consider Before You Sign The Cal-Exit Petition
As most Californians know, last year's Cal-Exit Initiative failed to collect enough signatures to get the proposal on the ballot. Most of you know that initiative was meant to approve California's secession from the Union.
Well, California's "America haters" have changed their tactics and won a reprieve. On 24 April last month California's Secretary of State approved Yes California's request to petition again for California to leave the Union. The newly named Yes California now has some 44,000 organizers who will be going house to house, asking Californians to sign their petition and get their new initiative on the ballot.
Before you sign, let me offer a bit of advice if I might. I abandoned California in 2004, so I have no dog in this hunt but just thought I'd let folks know what they should consider before putting their "John Henry" on that petition.
1) Let's start with national defense. California currently has some 200,000 U.S military troops stationed in the state. If we leave is California prepared to fund their own defense? Has anyone figured out how much it costs to lease one battleship? Is San Diego prepared to go it alone without the massive economic presence of the U.S. Navy? And given that, while California is the most populist state, the state has the lowest numbers of military enlistees, can your state find enough people willing to serve in a California military?
2) Given that Silicon Valley is your state's richest enclave, what will the rest of the state do when Silicon Valley declares themselves a "second Luxemburg" and keeps their money in house...leaving the rest of the state to tough it out without them?
3) How will Californians sustain their high housing costs without Fannie Mae, Freddie Mac and HUD to foot their mortgages?
4) How quickly will the Socialist State of California become a second Venezuela when Union capitalism depart the state? And can California alone negotiate trade terms as favorable without the massive weight of the entire U.S. economy behind them?
5) How thirsty will Southern California be when the United States cuts off their share of Colorado river water?
6) California, though just one of the current 50 states, owns more than $2 trillion of our national debt. Can they service that debt, considering that the state currently has $400 billion in its own state debt and has a $500 billion state pension deficit? (Will Venezuela send in a few economic advisors?)
7) Will Californians be happy under the oppressive iron hand of progressivism....the societal bent that chooses to limit your consumption of sugar and cigarettes, but legalizes pot, free needle exchanges for heroin addicts and frees felons from their prison sentences?
8) When the U.S. Border Patrol finally withdraws from California's border with Mexico, can Californians live with another hundred million impoverished Central and South Americans? Will the California DMV just issue them all driver's licenses, register them to vote, and issue them state welfare and food stamp cards?
9) Are Californians prepared to fund the cleanup and restoration after a 9.1 earthquake? Will students at Berkley fan out to rescue the victims? Will Cal-Trans finally go to work and rebuild earthquake damaged areas?
Just a few things to consider, my California friends. I for one would be happy to see your state leave the Union. Without California's immense liberal representation in our Congress the Republican Party can rule the roost and finally get our country back on the track of sanity. As it is now your liberal representatives are a drag on both prosperity and national morale.
So, on second thought, please sign that petition....and vote for Cal-Exit when it gets on the ballot. I assure you no Union troops will be coming your way to force you back into our grand Union. We'll all just issue a big sigh of relief, then come back for the Venezuela-like spoils once you collapse.
So please leave, California. And don't let that swinging screen door hit you in the ass on the way out.
Posted by A Modest Scribler at 2:00 AM

Caring adults have always rescued petulant children from their reckless behavior. But, yes you are right. There comes a time when one's patience is strained to the limit and the kids must stand on their own. Forgive me if I won't be visiting them on holiday!

You nailed it, Jeff.

I believe you think all Californians are as insane as their Politicians and Hollywood elite. I don't think so. But, in case the measure does get on the ballot,I am saving your Blog to help insure a no vote. There are many social outlets for me to repost. I'm not sure if I need permission but as I respect you and your many opinions, I'd like you to grant it to me. I won't beforehand as I'm not sure it will ever make it on to a ballot. Like I said. I don't think a majority of the people here are THAT Stupid. But we'll see.

Frank, you are always free to share any of my blog essays. And I wish you the best of luck on the initiative failing but California has failed to shock me anymore. Maybe you could head up the state's disaster relief after our military leaves.

One item you didn't add was how many people will leave the State should they decide to secede. Anyone with half a brain wouldn't want to live here where Lunatic Liberals would be free to enact laws that are crazy beyond belief. This place would be so oppressive, it would make Cuba seem like the Garden of Eden. Thank you, Scribe. Really don't want to have to use it but if I must. Oh, and love the Disaster Relief quip....

Lots more stuff I could have listed, Frank. Thanks.

Your debt reference should be shouted at the beginning of every legislative session in Sacramento. The most common reference to CA's economy is "fifth largest economy in the word", which completely ignores the debt/pension bomb waiting to detonate. I'm out in 3 years, back to TN with the wife or without, and I'll eagerly sign the petition to get this on the ballot. Why? The entertainment value alone will be worth it. This state is lost, in the union or out.

Smiling here too, Randy. The entertainment value of Calexit would be immense. You are wise to get out while you can.