"Why We Really Do Need Those "Stinkin' Foreign Workers" 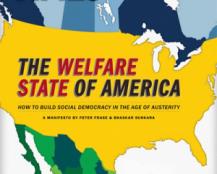 You've seen the ads. They're most prominent on Facebook....an ad that says "Tell Congress We Don't Need Any More Foreign Workers!"

Well, guess what?  We do!  A combination of events has made those foreign workers necessary, none bigger than the Welfare State itself.  Any careful review of the programs made available to those who refuse to work shows the government gravy bowl is growing ever larger...a welfare check, food stamps (even for perfectly healthy adults...including college students), Section 8 housing vouchers, WIC for the breeders, free Medicaid, free or reduced tuition for the fruit of the breeders...with free school breakfasts and lunches thrown in, state sponsored kindergarten and pre-school and day care for infants, extremely generous Child Welfare Tax Credits, free cell phones and even reduced cost utilities, paid for by you through your own higher utility payments.

And that welfare state has produced at least two, sometimes three generations who abhor work of any kind.  How many high school kids today work the farm fields to earn the money for their school clothes these days?  How many illegal Mexicans now work at the order window of your local fast food joint....broken English thrown in for free?

Even good paying jobs go unfilled.  Each month the Labor Department reports that more than 7 million high paying blue collar jobs go unfilled...with employers desperate for someone who'll learn to weld, or run a lathe, or maintain a junction box!

In Science and Engineering careers it's even worse.  High school graduates, if they are able to read and write at all, are poorly qualified for jobs that require them to know basic math or science...the fruit of your national and state teachers unions, continually rewarded for failure.

For every outlandish story about Disney importing Indian Nationals to run their high tech entertainment  networks there are a hundred stories of metal working firms, industrial firms, who beg for workers....workers who they'll even train "on the job" if someone will just step up.  Except that "blue collar" is now nastier than the word "fuck" to those "safe space-seeking" college kids who aspire to degrees in "The History Of Transgenders In Colonial America" or "The Philosophy of Marx In The Post Industrial World".  No welding wands or electric hammers for those kids.

Nope, the Welfare Generation wishes not to work.  They grew up without shop class in school..that program replaced by the play of "musical chairs" where everyone has a seat waiting when the music stops.

We use to be able to solve our labor problems through the importation of Mexicans for field work, and some manner of European for industrial or artisan work.  Except, now, so damn many of our immigrants arrive without notice, as illegal as hell, and then quickly learn about that huge bowl of government gravy that can be had with either an anchor baby, or fake ID, or some imaginative paperwork...no work required!

So, sadly, as we in-process each new crop of tit-suckers, and as we encourage the "everyone gets a blue ribbon" generation to resist labor..and live off the fat of the land, our labor needs simply go wanting...and we import someone...any damned one...whose willing to punch a time card ...to monitor an electrical station, or weld bar, or pick our lettuce.

Let's stop fooling ourselves.  We do need those foreign workers...if for nothing else to fill in while both Mama and Papa take six month maternity leaves, or take sabbaticals to Africa, or leave industry to sign up for a government job (to administer the gravy bowl), or, sigh...just because "work" is both tiring and unrewarding...and not nearly as easy as drinking gravy from that big bowl brewed up in Washington D.C.

it is a pretty sad state of affairs when I am in such agreement with you! When the Government "gives something" to us I wonder what the price? Oh, yeah, sure, it is a debt and we will be taxed forever to pay for it, but the real price? A dwindling of our self esteem, a loss of our will, a tossing of our Independence and more power to "Big Brother". We become insignificant and we chose that route.

Jerry, you are positively glowing with libertarian luminosity this morning. Old Tommy J. was right...."fear government"..."the less the better".

I figured out why we don't really deport the Illegals. If I go into my local Chinese Buffet. It's not uncommon for me to be the only white person in there. The rest are Hispanic of some sort. I'm not talking just a few people, I'm talking packed, with more waiting to come in. Where I work. I'm retired but work part time taking care of mentally and physically disabled Adults. We can't hire enough people to keep the places staffed.Always short. Pay is good, not great, Good benefits. Again, most Staff is Hispanic. Tons of jobs in Sonoma County are available. Few people really want to work. And I guess the Government must pay them more to not work because they have enough money to take their Family to an $18 a person buffet. This is truly a Bizarro World.

I believe you just seconded my essay very well, Frank. When I visit my home town paper in the Central Valley, all I see are Mexicans...a White face the rare exception. Like it or not, California has become Mexico North, with all the associated problems of Mexico. And yes, that illegal invasion at least partly because of the death of the American work ethic....egged on by all the incentives not to work.

Frank lots of jobs in Sonoma County,I live in Santa Rosa, hard for people to afford to live there though.

We're in total agreement. Signs everywhere in Santa Rosa pleading for Workers. Cut them off, Donald. At least let them earn their keep.