It's August....Time For The Annual Government Shutdown Threat 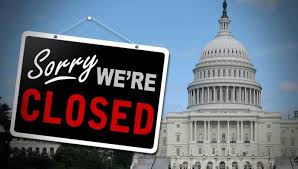 Well, it's August.  Time for the annual rumblings about a government shutdown to emanate from our nation's capitol.  The 40 or so members of the Conservative Caucus say, unless they see significant decreases in the rate of debt growth, they won't vote for that annual debt ceiling increase.  The Dems say they want $16.8 billion to buff up Obamacare...cause their able bodied sissies want their free health care.   The Republicans want $1.6 billion to build the border wall......but the Dems say $1.6 billion to build a wall is outrageous and is offensive to our 30 million illegals, and Mexico as well.

The Congressional Budget Office just issued a report, warning that, if something is not done to begin paring our $20 trillion dollar debt, we'll be paying $870 billion in interest payments on that debt (and much, much more if bond rates rise further).    Think about it.  That's $870 billion dollars by 2024, spent just on the interest on our national debt...funds that can't be used for our national defense, or to educate our youth, or heal the sick....just money to keep us from defaulting on our debt and achieving genuine 3rd world, banana republic status.   Consider this...that $870 billion dollars is one quarter of the entire amount the government takes in in fees and tax revenues.

And yet, for a decade and longer, Congress grumbles about this massive debt, then passes still another budget that will send the debt ceiling ever higher.  Our "dear leader", Obama, ran up $10 trillion of that debt, with Bush coming in an impressive 2nd, credited with running up $6 trillion during his two terms.

Is there any hope that we can avoid a Greece style default?  Not likely.  Folks might be surprised to learn that Greece ran up debt that was 78% of their total Gross Domestic Product.  How many of you would be surprised to know that, last year, our debt exceeded 108 percent of our GDP.  (We just get by with it since we have a better credit rating than Greece.)

Will Congress ever gain the will to fix this?  Well, we know our so called Republican "conservatives" can't grow the balls to kill Obamacare so what hope can we have for an even more gargantuan problem.

Brace yourselves folks.  Our leaders will issue hues and cries over our massive debt...then they'll pass a "compromise bill", and later a budget that sends our debt ceiling ever higher.

I wonder if enough people realize with happens in 2024. One quarter of the entire federal budget (what we currently spend on pensions and SS today in total) will be made strictly on interest payments. The math is sobering, and add to that the growing number of retirees that will further draw on the social services. You know the answer: Much higher taxation, probably accompanied by means testing for benefits.

Yep, I read the sad news about the interest monster looming (and wrote about it in detail for a future blog). (But after Warren Buffett has landed on the side of the Dems, it would be pleasing to see him pay Social Security taxes all the way up to his combined billions...and cut him off from SS payments).

I've been saying this for years, that our debt makes the Greek debt look like a pittance. And the biggest problem is that we can never pay it off. There is no way we can pay off even $500 Billion a year for 40 years (and that is with no interest). Like a mother pig, our Government has too many people depending on its tit to keep them happy with free food, housing, utilities, health care and cash for their entire lives to ever stop it and pay off our debt. And the debt ran up by Barry Obama was in trillions, not billions.

Shame on all of you for not catching my mis-types on that scary debt stuff. Wrote billions, not trillions. Now corrected
Thanks for the catch, Wally.