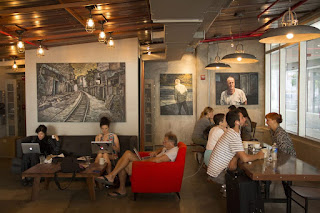 I was sitting in my study this morning, minding my own business, CNBC playing in the background, when I heard something that jarred me into paying full attention.  It seems that there's one of those socialist coffee kiosks down in Miami Beach that pay their employees 30 percent more than the minimum wage....and are now demanding that our government masters make everyone else do the same.

Let's cut to the basics.  This coffee kiosk, called Panther Coffee Company, is demanding that Miami Beach flaunt the states minimum wage laws, and write their own.  Tossing out the cents, Panther Coffee wants to increase the city's minimum wage to $11.00 dollars per hour with dollar per hour increases schedule in the immediate future years.

Am I the only one that has a problem with this?  I mean, if Panther Coffee Company wants to pay their employees $11 an hour, plus tips, that's great!  But why are they sticking their nose into the business of others?  And why do they want those increases codified in law, to force other businesses to be equally generous?  Why are liberals always asking for the heavy hand of government at every turn?

If this doesn't bother you, consider this.  I just did a little research on the coffee business.  According to the National Retail Federation, the average costs for a cup of coffee at Starbucks and Dunkins is .31 cents.  You don't have to be a rocket scientists to figure out that at, from $3 to $7 bucks a pop, the margins on coffee are huge.  And as long as American lemmings are willing to pay those margins, coffee businesses are doing great...and can certainly afford to pay their employees $11 dollars per hour. In fact, they could probably afford to pay even more!  A visit to Panther Coffee Company's website will reveal that Panther offers no less than 20 "special coffees", stuff they label "Single Origin Brews"...and those coffees are priced at $11 to $20 dollars per cup!  Yeah!  $20 bucks for a cup of java!  And lets face it folks, those $20 dollar cups of coffee wouldn't be on the menu if they weren't selling.

So folks, what you have here is still another "corporate socialist" company, following in the footsteps of Starbucks, who are gouging their customers in order to implement their "socially designed" political aims.  And yet, time and again, a million times a day, Americans stroll into a coffee house, and fork over huge sums to subsidize the generous salaries of folks who do no more than pour you a cup of coffee...and that's after these consumer lemmings have already forked out enough taxes to fund welfare and WIC and food stamps and free health care and free school breakfast and lunch for the "47 percenters"...that wide swath of Americans who find working an offensive activity!

But, let's get back to Miami Beach, shall we?  If Panther Coffee gets their way, and gets the heavy hand of government mandates involved, that second hand bookstore down the street is going to go under.  As will the travel agency, the mattress store, the mom and pop convenience store, or the barber shop that's been in business for half a century.  Why?  Because none of them have the allure of a fancy coffee, nor can they hope to match those kinds of profit margins as the coffee barons who have managed to fool "some of the people, all of the time".

Why the hell can't liberal people just stay the hell out of everyone else's business and allow the law of supply and demand to determine wages and prices?  Why do they insist on making everyone else accede to their demands...even when the playing field is not level and never has been?

The one constant in every leftist idea that is "good for the people" is the absolute requirement of the use of government coercion in implementing it nation wide. On it's own, almost all of these "good ideas" are rejected by those of us that have to meet payroll. Only when the government steps in and REQUIRES COMPLIANCE are they enacted. The left loves the free market, until it refuses to do what they think should be done. Then, bring in the hammer of government.