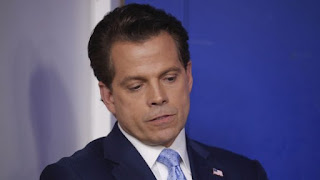 By the time this blog goes to press there will probably be another casualty of that game called "Musical Chairs" emanating from the White House.  First went Comey...because he wouldn't stand up, salute the Trump flag, and pledge a loyalty oath. Then it was Spicer  (Was it his gum-chewing or was it because his alter ego was really funny on Saturday Night Live?)  Then Chief of Staff Preibus bit the dust when the Mafia Don, Anthony Scaramucci didn't like the cut of his jib.  Then Scaramucci himself fell on his sword, old Anthony's federal career lasting ten days on the Trump Express, where folks are tossed off the back of the caboose with much fanfare and few explanations.  Can Attorney General Jeff Sessions be far behind?  After all, it doesn't matter that Sessions has been rounding up illegal Mexicans and wholesaling them back to Mexico.  Or that he's declared war on M13 gangs.  Or that he's handed funding to our law enforcement officers and loosening the shackles that Obama had them wrapped up in.  Sessions has even performed a miracle....getting those immigration judges off their ass and quickening the deportation process...even to the point of making them go into the detention centers and issuing deportation orders.

Session's performance doesn't seem to matter to The Donald.  Nor does allegiance or loyalty.  The Trumpster has seemingly forgotten that Sessions was the first legitimate politician who gave him "street cred".  It was Sessions who filled those stadiums down in Mobile and Birmingham and wholesaled red Trump hats to the masses.  And it was Sessions who was "Trump" long before Trump came along....advocating for a border wall, stepped up deportations, and tougher law enforcement.

No one on Capitol Hill gave a rat's ass about the firing of Spicer, or Scaramucci, nor did any of Trump's voter base.  As to Comey's firing, the sentiment is split, between those who thought Comey was too amenable to Loretta Lynch's political maneuverings, and those who thought Trump's covert urgings that  Comey forget about the Russian thing just a bit seedy.

But you can be damn sure that Session's firing would create a rift among Trump's hardcore supporters.  Like me, people who believe in our immigration laws are highly pleased to see small armies of Mexicans being marched off to jail.   And I just loved that newspaper photo op of Sessions down in South America, riding herd on the authorities down there to clean up there M13 gang problem...else those American dollars dry up right before them.

Amid all this chaos there is hope...that Trump's tweets might diminish a bit, that the chaos in the White House subsides.  Chief of Staff John Kelly seems to have signaled that when he gave Scaramucci the boot.  One can only hope.  Hope that the circus leaves 1600 Pennsylvania Avenue...and something finally begins to get done over there in the West Wing.

As always, fingers crossed, still looking for that pony under the pile of political bullshit.
Posted by A Modest Scribler at 2:00 AM

it should be quiet and go well for 17 days anyway!

He runs the White House like he runs his Businesses.Hire a manager. If he doesn't produce, fire him get someone else. Makes sense to me. I think he'll keep Sessions for a while. Sessions is a no nonsense, Badass. who produces. Just what is needed.

I'm split: I agree with Frank regarding how DT operates (hire, produce, or get fired). On the other hand, it's nice to see the guy in charge get rid of people that don't do what they're told or behave inappropriately, unlike all the previous administrations that simply kept the dead weight because.... Needless to say, whatever happens, the MSM will find fault and lay it at Trump's door.

Wasn't trying to change anyone's mind here. Just my take on "the circus". And I'd bet a great deal that this circus stays in town for a good long while.