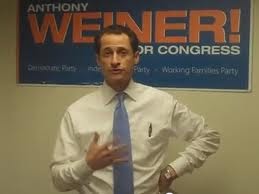 I'm sure by now everyone has heard about the Tweeter antics of Congressman Anthony Weiner.  You probably remember him from C-Span when he stood up in the House Chamber and angrily screamed out a long litany of accusations against President Bush, the prime accusation being that Bush was "immoral".

While I have never been a big fan of George W., somehow Weiner's diatribes rung false with me.  Being of an age where just a sliver of wisdom is gathered during a lifetime, I was a bit suspicious of Mr. Weiner, having heard repeatedly in my life that those who scream the loudest often have the most to hide.

Having now been "exposed" to Congressman Weiner's true character, and having learned that Tweeter can be used for far more than a brief blip on what one is doing..and where they are at the moment.

However, do not feel sorry for Mr. Weiner.  He will be just fine.  Remember that he is a Congressman in New York City.  Yes, the same NYC that re-elected good old Charley Rangel, the same Charlie Rangel that heads up the House Banking Committee while dodging taxes on more than a million dollars in income.
NYC, home of Al Sharpton, who proved that calling yourself Reverend is a great strategy for amassing a large fortune through "pulpit fees".

If New York City political  history is any indication Congressman Weiner will be re-elected to Congress in a landslide.  Nothing like a little corruption in NY politicians to make the every day NYC $200,000 dollar Union Trash Hauler feel like he's just "one of the boys".  Congressman Weiner can undoubtedly count on those $250,000 dollar unionized NYC cops for support!

I have to admire the cunning of Democratic politicians and must condemn the stupidity of Republicans.  Every time a Republican rascal gets caught he ups and resigns from office.  Congressman Weiner says he won't resign...and hell, he just might decide to run for Mayor of New York City!

I can't think of a candidate more fitting for the job..and an electorate more deserving!

P.S....this just in!:  Fruit of the Loom Underwear has just offered Congressmen Weiner a huge salary to be their next underwear model.  They say he's just the guy to "fill" the job.
Posted by A Modest Scribler at 2:02 AM