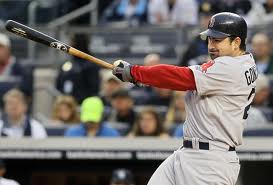 For you non-baseball folks, Adrian Gonzalez is a baseball player.  Now, in his eleventh year as a pro, Adrian is now pulling in big time "silly money" with the Boston Red Sox.  Drafted by the Florida Marlins, then traded to Texas, then traded to the San Diego Padres whom he blessed with respectability in his five years with the Pads.

While with the Padres, Adrian embraced his team-mates, didn't complain about their failure to join him in providing any offense, never complained about the far reaches of Petco Park; he just went out every day and left everything he could give that day on the playing field.

Adrian is a gold glove first baseman and, although slow of foot, his every move on the field looks like someone who was made to play baseball.   Adrian's true grace comes when he steps to the plate.  His swing is as smooth as butter.  I've only personally seen one other player who matches that grace; some guy named Tony Gwynn.  Adrian strikes out a little more often than Tony (one year Tony struck out only 13 times over a full season, in over 500 at bats!) but Adrian's got more power than Tony and can knock balls out of anywhere in the ball park.

San Diego wisely traded Adrian to the Boston Red Sox last off-season.  San Diego is not a big city market for baseball and, in these days baseball is a big business, so the Padres didn't even bother to offer Adrian a contract.

Adrian grew up in San Diego and truly wanted to stay.  His dad installed air conditioners and watched his boys play baseball.  He taught Adrian and his brother a true work ethic as evidenced by their work in the art of baseball.

So, Adrian joined the Boston Red Sox.  The Red Sox now pay Adrian over $22 million dollars a year.  But watch Adrian as he goes about his business.  He has the same unassuming and mild manner he had when he was pulling down the major league minimum.  Unlike so many ego-driven baseball divas, Adrian didn't get fat and lazy or go out on a big spending spree and buy a Maserati with mink-lined seat covers.  He just got out there and ran the wind sprints and did the knee bends and got ready for the season.

After Adrian signed the big contract he flew back to San Diego and held a meeting with the heads of the various charities he supports.  He appologized that he won't be able to spend as much time with them while playing ball in Boston but promised that his financial support would be even greater, in keeping with his bigger paycheck.

How's Adrian doing in Boston?  Well, as of today, Adrian leads the American league in Batting Average (341), Runs Batted In (59) and he's sent 20 doubles bouncing off The Green Monster.

Adrian's Boston team-mates love him; they say he's a quiet leader and a sweet guy to have on the team.  The rabid Boston fans love him too.

And there's an awful lot of Padres fans that miss "the good guy".  They miss seeing that sweet swing and those marvelous "saves' at first base.

We wish you well Adrian.  God go with you...and when your playing days are done, come back home to San Diego.
Posted by A Modest Scribler at 1:40 AM