"Careful What You Wish For, Nance" 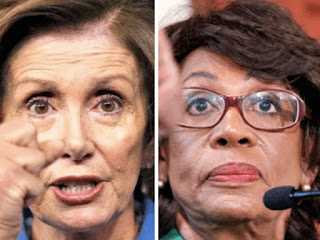 Psst!  Hey Nancy, how do you like them New York apples last night?  A Hispanic Socialist by the name of Alexandria Ocasio-Cortez took down a liberal Congressman from Queens who had been parking his liberal ass in the House for 19 years!  He did everything, right, Nance!  He funneled federal lucre to his district, he voted against border walls, he opposed every Republican proposal that ever sailed through Congress.  Then got beat by a lady who believes Venezuelan socialism is just the ticket, and that toilet paper shortages and 300 percent annual inflation is just fine as long as every one is suffering equally.  She believes in open borders to such an extent that she wants to fire ICE, the Border Patrol, and everyone who works to curb illegal immigration.  Cool, huh Nance?

Nance, you wooed Oakland's Black Panthers when no one else would.  You cozied up to the Occupier crowds.  You partied hearty with Maxine Waters and the Texas bitch that tried to wear cowboy hats in the halls of Congress.  You went against many of your own constituents to support illegal immigration and sanctuary cities, even as your own citizens were being mowed down by illegal Mexican thugs.  You supported teachers as they indoctrinated our young with their liberal teachings.

So how do you like it now, Ms Nance?  Through your coddling you have now harvested a whole new crop of radicals who don't like you much!  Just saw you shouted down by illegal Mexicans on your own home turf this week!  And now the socialist snowflakes you've fashioned don't like you much.  They are saying why should we give a pass to a rich bitch who owns two mansions in San Francisco?  Why should we show respect for a woman whose husband is a billionaire, and a Congresswomen who, before they changed the laws, participated in insider stock trading, using classified info passed to congressional committees?

Ocasio-Cortez is just the first wave of shock troops, Ms. Nance.  Others will come.  Others will enter the races, running on platforms of free student loans, student loan forgiveness, free housing, open borders.... and shouting "health care is a human right!", while never giving thought to who pays for that free "human right".

Way to go, Nance!  Way to go, Barrack Hussein!  Way to go Chuckie!  (Oh, Chuckie....you may be next on the electoral hit list......NYC's already got themselves a communist mayor, and Queens now has a banana republic socialist...so way to go.) 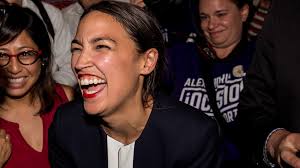 Oh, by the way, Ms. Nance, stay away from hardware and lumber stores.  I hear the socialists are coming for all of you billionaire liberals, buying lots of rope.  They plan to hang all of you from streetlights and freeway overpasses.  These are hardcore socialists who know damned well you own billions and aren't sharing.

But then, you asked for it, right?
Posted by A Modest Scribler at 1:15 PM

Couldn't happen to a nicer group of people....

I am very glad this happened. Why? This PR communist is the real Democrat party, and people need to understand that fact. No more pretending to be moderates, these folks want to fundamentally transform America (Hey, haven't we heard that before?) into a state never intended by the founders. It crystallizes the differences between the two sides. Your choice, America: Is this what you want?

I agree with both of you. The wider we can draw the lines of demarcation between the two parties the better chance for success Republicans have.

I agree but we have to watch out for these air head 18 through 40 age group. Many of them think socialism is the way to go.