Good For The Gander? 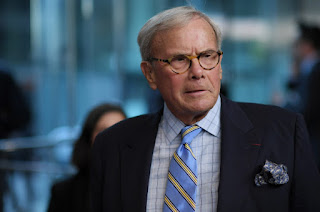 Tommy Brokaw is angry.  In his Friday morning, 4AM letter he bemoans the fact that a female co-worker has charged him with sexual assault.  Brokaw tearfully opined that fifty years of good work and citizenry went down the drain from his own personal "character assassin".

Well, isn't that special!  I'm sorry but I have ask Tommy where he was when small armies of men were brought down by character asassination, supposedly happening decades and half centuries from when hey allegedly occurred.  Where was Tom's offerings of "reasonable doubt" when charges were made against his media competitors?

Alas, Tom was safely on the sidelines, secretly grinning...even joining in on the tar and feathering.  I remember channel skimming early one morning last fall and finding Tom Brokaw on Morning Joe, castigating the many male brutes who had savaged so many in the "Me Too" movement.

Now it's Tom's turn in the ring.  No doubt this stag too will be taken down......shuffled off to the wings, and never heard from again.  That is the nature of the beast these days.  No matter how long ago, no matter how little proof is offered, a woman can now simply make the charge and take down any male of their choosing..proof be damned.

So do I feel sorry for ol' Tommy?  Nope.  I might have had he extended the courtesy of waiting for proof before his own piling on.

I have only one question for my dear readers.  Don't you find that there seems to be a preponderance of wacky women making these charges?  And don't you find it bizarre that so many of them waited for ages to proffer them?  Even more bizarre; don't you think it's rather strange that the general public eats this up with a big spoon and believes every word, no matter how lacking in credibility the Me Too victims have?

Go back and read my blog essay "In 50 years we'll all be chicks".  Recent events have made the inevitability of what I wrote unquestionable.  But I will admit that the process of the pending male holocaust is now accelerating.

They are all getting what's coming to them. They preyed upon women who were vulnerable and afraid of losing they're jobs. maybe even be a little star struck and flattered....initially. I was brought up to respect Women. They may have too but the opportunities were just too tempting. I blame the Women also for not putting a stop to it 20 years ago. But it's a different world today and the Media has helped build this world so I don't feel sorry for Cosby, Brokaw or any one of them. You reap what you sow.....

So, Frank, you have no problem with assigning guilt simply by accusation....often many of those accusations 30 years old? Okay.........

What do these woman have to gain by falsely accusing? Why would they put themselves out for ridicule if there's no $'s to be made(see Stormy Daniels)? These Media types are no better than Trump when it comes to women(yeh, I said it). They pointed fingers at him when they should have been pointing fingers at themselves. Karma, Scribe. Karma.

You're not as worldly as I thought, Frank. I can think of a dozen ways these ladies can exploit their notoriety....books, talk show gigs, movie roles, etc. Lots of reasons to lie, Frank. I'm not excusing the men who are guilty. But the me too movement is nothing more than a season of lynchings without trial.

Worldly? Oh, Hell no. But I can smell a dead rat when I see it.