Neither A Debtor or Borrower Be? 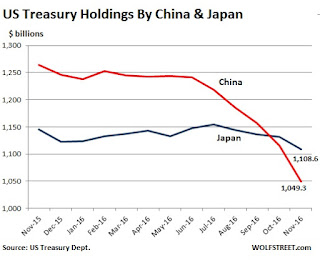 For those wondering why China is not cashing in their U.S. Treasuries, given the onslaught of our mutual trade war, well, actually the Chinese have been paring their U.S. bond holdings for several years now.  As one can see by the chart, while Japan's share of our debt has kept relatively steady, China has been selling our treasuries for quite awhile now.  Early in the decade China held as much as $2 trillion of our debt.  As of the end of 2016 we can see that China has been net sellers of our debt.

So if China is not happy with Trump's tariffs why have they not sold off their remaining holdings?  Well, they really can't.  Any mass selling by China and you'll see the value of U.S. currency decline versus the Chinese Renminbi...and that would only make Chinese exports more costly in a world where the dollar remains the world's currency.

We simply don't know how this tariff war will work out.  While Wall Street is quaking in their $500 dollar loafers, folks on Main Street, at least the working stiff, is happy that someone is finally fighting for their jobs.  Past tariff implementations have been unsuccessful.  Bush tried it in 2006, then caved and cancelled them in less than 18 months as politics raised its ugly head.  We don't know how stiff-backed Trump will be.  China clearly has the political advantage since, in less than 18 months, Trump will be trying to win re-election while President Xi just solidified himself as kind of a "President For Life" that dictators often do.

Let us see, boys and girls.  Those first U.S. tariffs were relatively small, as was China's.  Trump has now upped the ante on some $50 billion in Chinese goods so we can expect China to retaliate.  Those in the know say Trump is just exercising his "art of the deal" tactics with these tariffs.  They say the tariffs are meant to shake China by her big shoulders and force her finally to come to the bargaining table with some serious intent to play fair.

Let's hope Trump wins this one.
Posted by A Modest Scribler at 2:00 AM