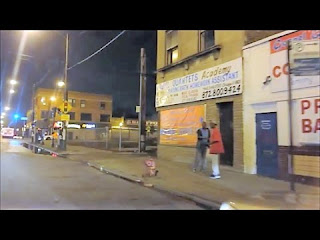 Seems that our cultural elites and politicians are always issuing edicts about how our society is supposed to be managed.  And, really, anyone with a rational mind can see the hypocricy of their words with every uttering.  So I've come up with a few scenes I'd like to see and these liberal elites live up to their own arrogant edicts.

Yesterday, in front of a wacky crowd who chose to honor Colin Kaepernick, the guest of honor said America has got to stop the "legal lynchings of Black and Brown people."  How interesting.  I'd like to see Kaepernick venture into Chicago's south side at midnight.  (And you don't get to call the police for help).

I'd like to see Jerry Brown and Nasty Pelosi bar hopping in South Central Los Angeles.

Would enjoy seeing Barack Hussein Obama seeking out Emergency Room care at midnight at any ER hospital in America.

I really would have enjoyed seeing Donald Trump and Joe Biden duking it out, as they said they would if ever given the chance.

Next April I would love watching Diane Feinberg's tax preparers handing over to her her IRS Form 1040, absent the federal write-offs for mortgage interest and property tax on her and her banker husband's multiple mansions.

I would dearly love to see highly ethical, well spoken Vice President Mike Pence assume the Presidency by this Christmas.  I'd tell The Donald thanks for the Supreme Court nomination, thanks for the tax cut, thanks for curbing Chinese cyber theft, but we really need to win in 2020 and it ain't happening with you.

I would greatly enjoy seeing every talking head in the liberal mainstream media get a healthy dose of electric shock every time they censored or twisted the news to advance their own personal political biases.

I would love to see NBC's 30 Rockefeller Center come crumbling to the ground, their entire liberal news staff coming right down with all the glass, brick and mortar....and finally give Chris good reason to pee down his trouser leg.

Harsh, Scribe. Oh, and if Trump didn't run in 2020, the news business would have nothing to write about. Trump is a Godsend to them. Good news is that Trump has exposed the Liberals for what they really are. Tolerant? Not a chance. Hate filled, intolerant Sexist, Racist, any ist you can think of. I wouldn't wish Liberalism on my worst enemy.