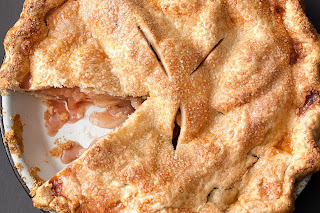 Liberals are small-minded in every respect, none more than in their continually trying to advance the idea that one must take a slice of someone else's pie if one is to be fair.
Conservatives have always championed baking a bigger pie...one that feeds more people through the simple means of doing things more efficiently.
Those two opposing theories were formulated centuries ago. It was the liberal economist John Maynard Keynes who advocated for government masters who would control the distribution of wealth. (It was also the economic theories of Keynes who Lyndon Johnson followed in drafting his massive fail in his War on Poverty programs...programs that created whole generations of lazy folks addicted to a government check.) Conservative economist Adam Smith in his "Wealth of Nations" disagreed with Keynes. Smith said, in effect, "just grow the pie larger".
And we have. That truth played out just yesterday as I was reading through some 1976 Fresno Bees that my friends Carrol and Jerry so generously shared with me.
In looking through the grocery ads I began comparing the minimum wage in 1976 and now, then gauging whether prices were cheaper then than they are now. To do so I had to use percent of hours worked". Given the eternal erosion of the dollar, that's the only way one can accurately compare price points.
So, in 1976 the hourly minimum wage was $2.30 per hour. Today, because we've experienced a new birth of freedom across the years, the average minimum wage varies wildly, by state. However the U.S. Department of Labor helped me out a bit. Using statistical metrics for all 50 states the Labor Department says the average hourly worker is paid $10.50 an hour.
So, okay, let's get back to that grocery list from 1976. In 1976 a six pack of Pepsi ran you $1.30. To buy that Pepsi six pack in 1976 you had to work over a half hour. Today, thanks to greater manufacturing efficiencies, and the competition from free markets, you need work only about ten minutes to earn enough for that six pack....which means you're wealthier today because of free market capitalism....all because America baked a bigger pie.
But let's not restrict our comparison to soft drinks. That same 1976 ad showed a sale on chicken breasts at $1.00 a pound. So, again, you would have had to work just a bit short of 30 minutes to earn a pound of yardbird. Well, ironically, off to the right of my desk sits a current food circular for a local supermarket. They are hawking chicken breasts for .89 cents per pound. So, were I earning the average minimum wage today I could buy eleven pounds of chicken breasts for less than an hour's labor....or five pounds or so more than I could in 1976.
Oh sure, I know most of you just love reading what a gallon of gas cost in 1976. But even with gasoline, one has to compare each era's hourly wage to accurately measure price points. For example (I looked it up) the average 1976 price for a gallon of gas was .62 cents per gallon....and it is just as "cheap" today at the current national average of $2.90.
To my liberal "Keyenesian friends", who always bemoan that someone else has a bigger slice of the pie than you, I will only say that free market capitalism has grown that pie far larger, and given folks in poverty far more opportunity to have a slice than anything you and your government masters ever dreamed up.
On Friday we learned that our Gross National Product (the sum of all our nation's goods and services) grew at 4.1 percent. That compares to Obama's average over eight years of less than 2 percent GDP growth. Were you to listen to CNBC, CBS, ABC, NBC, or CNN over the last year and a half you would have heard that a 4.1 percent growth rate was impossible.
It really isn't. When the restrains of oppressive government are torn away our nation has proven again and again that we can grow a bigger pie. President Reagan threw Jimmy Carter out of the kitchen in 1980...and grew a monstrous pie.......a pie that nourished such startups as Apple Computer, Home Depot, Walmart, Intel Corporation and hundreds of other companies that made our lives better.
Grow the pie, people. Quit bitching about the size of the other guy's slice and grow the damned pie.
That's your economics lesson for today and............
you're welcome.
Posted by A Modest Scribler at 2:16 PM

The trouble with statistics, Dearel, is you can relate almost anything to the Pacific Tidal charts if you have a mind to. In 1972 I bought my house for $8,375 (no typo) while making $2 per hour. That was about a total of 4,120 Hours of work for a house. Not a Grand House but a house in a nice neighborhood. Today a similar house sells for over $200,000 and, at $10.50 per hour, that works out to be 20 Thousand Hours of work!!! Want more? Tuition at the U of O was less than $100 per term. 50 hours of work! so it should be $500 now, right? or less if we had a bigger pie! Groceries? Hamburger was 3 pounds for a dollar 35 cents a pound, maybe 15 minutes of work after taxes. Now it is $7 per pound, almost an hour after taxes.
While earning $2 per hour we paid $75 per month for a 2 bedroom house with a nice fireplace.That was about one week's work. Today you can't rent a room in a house for one week's work. So many people want to go back to the "good old days" of the late 1950's and forget we had a Progressive Income tax in those days. Rich people used to pay their share. and when they paid their share we developed the Interstate Freeway System. Today we can't even repair it. When they paid their share we developed NASA and went to the Moon. Today we can't even afford to go to the Space station. We pick and choose what we want from the past and it doesn't work that way. There will be a High Tide today and a fire someplace in California. I am sure there is a connection there.

From my own personal reckoning I find your examples chock full of either inconsistencies and financial examples for things that were warped out of whack by your liberal friends, Jerry. Sometime I'll debate your presumptions but right now it's 6AM on Sunday morning and I have other things to do just now. I will say before leaving however that tuition got out of hand when the Feds got way to generous with grants and student loan aid. As to housing prices, they might be reasonable if we didn't have 30 million illegal invaders to shelter. More later.

Who pays $7 a pound for hamburger? Inflate much, Jerry?

The "good old days" were a different America. we didn't have Gated Communities. My neighbor was the local banker, a Professor lived across the street and in between blue collar workers. Mixed economics and mixed neighbors. The CEO of the "average" company made Six times the wages of his workers. Now we live in fear. Gated Communities and the CEO can make Hundreds and sometimes Thousand's of times their worker's wages. It is always the same pie, Dearl, it is just cut differently now. Never before in History have so few owned so much. I don't begrudge them this, I just want them to pay the Same 35% that I do.

So disappointed to see that Jerry doesn't get it. "It's always the same pie". Not only is that statement really stupid, it lowers my earlier assessment of his intelligence. The pricing analogies could not have been more clear. Sad. Damned Sad. Perhaps I won't respond to his first post.............I would clearly be wasting my time. It would be like trying to discuss physics with a two year old.

cat got your tongue, Dearel?

Nope. Just choose not to wag it in vain.

it is Simple Math, Dearel. times have changed.

Absolutely correct, times have changed. The government continues to spend far more than it takes in despite record revenues each year, and it does so on increasingly irrelevant programs that do not benefit society as a whole, but are dedicated to minute subgroups. The size of government has grown, in large part because of the rise of the bureaucratic administrative structure these programs seem to require. You claim we had a "progressive income tax" way back when, but omit the fact that 47% of the wage earnersin today's America not only pay no income tax, but many receive money from the government in the form of grants or subsidies. Liek most leftists, you see an America that is grossly unfair in favor of those that earn more than yourself when the fact is very simply that we are spending far too much on things we don't need and requiring too few American earners to chip in.

Thanks, Randy. I just didn't have the heart to enter another useless debate after his total ignoring the proof I offered.

Liberals don't need no stinking proof. They just want a Government check. Proof is something you find on a liquor bottle....

yeah, mea culpa, you are right about Big Government and now the Welfare Contribution to "Farmers" to the tune of 12 Billion Dollars! I wonder where that money comes from?

That $12 billion sure doesn't come from the "47 percent", Jerry. When you start bitching as much about those freeloaders as you do about the rich you just might start learning something.