Do Nancy And Chuck Really Care About Those DACA Kids? 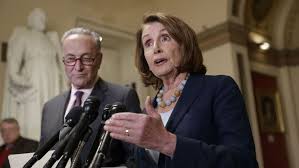 Through this morning's coverage of the Congressional spending bill we learned from Speaker of the House Ryan and Senator McConnell that Democrats were offered what they wanted on DACA...a path to citizenship for some 1.6 million illegals brought here as children.  In exchange the Democrats would be required to support the $25 billion to build the wall, fund an expansion of detention facilities, and hire more border patrol.

The Democrats refused.  They simply could not face the idea that future Democrats might not ever again be able to cross the border and vote to keep them in office.  Nor could they tolerate building more detention centers to house illegals nabbed by ICE and awaiting deportation trials.

If I were a DACA kid I would be worried.  While both the Supreme Court and the liberal-populated lower courts have put a temporary stay against deporting DACA candidates, in no way does that guarantee them a safe space in America.   If I'm reading The Supremes correctly, they will rule against Obama's DACA program.  It was unconstitutional based on the essential fact that only Congress can pass immigration law.  And they will rule that Trump, despite his rhetoric, had the right to end a program that was unconstitutional in the first place.   So, when The Supremes get around to ruling on DACA this fall, those DACA kids are going to be on the ICE removal list.

So what will Chuck and Nancy do when their best bargaining chip melts away on the marble floor of the Supreme Court?  What will they have to offer Trump and the Republicans to get a deal done?  The Mexicans have a word for it; "Nada".

There is no doubt in my mind that the Congress will eventually pass some sort of DACA legislation.  But without the courts hanging over their heads, and absent anything the Democrats can offer in trade, I suspect any DACA legislation will be far less generous...and involve far fewer candidates.  And if Trump is smart he'll insist on that wall money, and that detention center money, and money to hire the 5,000 additional border patrol workers he initially wanted.  And I would add one more codicil to that agreement....a firm line in the bill that insists Sanctuary Cities be denied federal funding if they continue to violate our immigration laws.

We shall see how this unfolds.  But I think Chuck and Nancy just sold those DACA kids down the river.
Posted by A Modest Scribler at 9:48 AM

Quick answer to your question? No, they don't. They aren't smart enough to know they deal from a hand of weakness. Not strength. They'll huff and they'll puff and they'll fail to blow the DACA house down. Such mental Midgets.....

Sadly true. I predict this will turn out just as I said. The Democrats all seem to now live on the fringe of society, whether ethnic, alternative gender, or even the rule of law.