Battle Fatigue And The Energizer Bunny 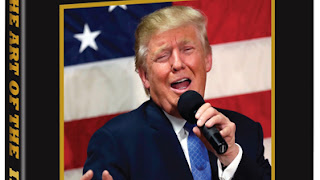 I would not trust Donald Trump to babysit my grandchildren, or drive my wife to the grocery store.  Trump is like having as your best friend the school bully.  As long as he's doing good things for you, you don't much care who he's beating up in the parking lot.  But, as I witness Trump's machinations, I am frankly suffering from battle fatigue from Trump's "Energizer Bunny" approach to governing.

Trump, fueled by T-Bone dinners and four quarter pounders with cheese, double fries lunches, awakes at 4AM, grabs the remote control, begins flipping through both friendly and enemy news stations, and begins tweeting.  Trump has time for tweeting because he seems totally incapable of reading and comprehending policy papers beyond the first paragraph.

Trump is the ultimate hip-shooter.  Sometimes he scores a hit, such as his Supreme Court nomination, his tax cuts, and his more forceful illegal immigration policy.    But Trump misses the target far more, and he's burdened with a seemingly total incapability of articulating, or inspiring.    In his wake are fading porn stars (even as he had Melania at home) and questionable business ethics and a total absence of loyalty to his friends.  Just this morning Secretary of State Rex Tillerson was dismissed because Trump seems not to understand the nuances of foreign relations and he was dismissed "in abstentia" as Trump never has the courage to fire any of his many victims face to face.  Attorney General Jeff Sessions, Trump's first and most important political campaign ally, is constantly battered by Trump, Sessions' biggest sin his insistence on adhering to the rule of law.  Given Trump's long list of victims, some are abandoning the ship, many more are reluctant to sign on...most of them suffering battle fatigue from Trump's "energy bunny-ness".

As I have stated here repeatedly, (and I have been fair in both cheering and condemning Trump as the situation warrants) I wanted from Trump conservative court judges and money to build the wall.  That is all I still want.  Every day I get up and pray that Trump lasts long enough to outlive one more liberal Supreme Court judge and stick around long enough to fund the wall and arrest a few million more illegals.  After that I'd be perfectly content to see Trump retire to Mar A Lago and his 27-hole golf course.

Frankly I'm ashamed that Trump's in the White House.  I'm ashamed that the entire conservative movement is painted with the same broad brush.  Morally he's a snake, ethically he's a coward, mentally he's psychotic.  But unlike the two Bush boys, and unlike Barack Hussein Obama, Trump occasionally stumbles to success in some of the national issues I consider most important.  And, as much as I deplore Trump, I'm grateful that he has shaken up Washington and its "good ole boy" way of doing things.

So I'm ashamed that I've allied with the school bully.  But I'm not ready to abandon him entirely until he beats up a few more of those whom I abhor.  But, yes, I'm getting battle fatigue from how Trump gets that done.

Posted by A Modest Scribler at 8:06 AM

I understand and agree with much of what you wrote. What you left out (and I remind myself of this daily) is the fact if Trump wasn't the President, then Hillary would be. That alone justifies his existance to me and validates his presence in the White House. Yes, he's bad. She would have been exponentially worse.

Yes, Randy. Agree that Hillary would be worse...far worse. I'm just saying I'm disgusted by the "hit man" I had to hire to get rid of her. He's over in the corner picking his nose and scratching his nuts and I just wish I had a hit man less ugly. No question I would have voted the same way today, given the choices I had.

I agree with both of you, what choice did they give us? Looks like 2020 will be more of the same. 300 Million people and we get the government we deserve.

Jeff, I believe we'll have the Republican version of 1980, when Ted Kennedy challenged President Carter for the party nomination. But you are right; we are certainly getting what we deserve.

This Country definitely needed a "House Cleaning" and we brought in the right man to do it. I think(and have from the beginning) that he will only be President 4 years. He has a short window to do what needs to be done and can't wait for people to "come around". They need to be battle tested from the start and if they can't adapt. Gone. He's smart, very smart. And the resistance he's getting from the Left(and many of his own party) is that the same ol, same ol, business as usual is over. For that, he needs to be the Bully. But he's not Bullying the Students(the common man). He's Bullying the Teachers and School Administration. BIG DIFFERENCE from how you have viewed it, Scribe.

You disagreements noted...and respected, Frank. Though we will never see eye to eye on Trump, I respect your opinion.

Thank you, Sir. As I have always respected yours.