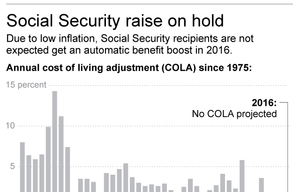 You're probably all read by now that our government masters have decreed that there won't be a Cost of Living increase for social security recipients this year, only the third such freeze in the last 40 years.

The cause?  The Treasury Department has announced prices are low; the Consumer Price Index (CPI) is rosy, and those old people can get along without a raise....even if they do have to pay higher Medicare premiums.

With regard to prices, certainly, thanks to those damn "frackerss", our gas prices are down.  However, have you taken a good look at the price of eggs, dairy, chicken and hamburger lately?  How's your water and electric bill faring?  How's that 25% bump up in your Obamacare premiums working out for you?

Let's set aside all that and just look at how the government determines the CPI.  Our government masters use kind of a "eat this, not that" process to determine the overall CPI.  So, in the government's thinking, if hamburg gets a bit pricey, you'll move to chicken, and if that gets too dear, you'll switch over to pork...so, people, in the government's eye, prices never go up because all of our patriotic citizens will "settle" for something less...so inflation need never be a problem.

Same thing with your electric bill....if your local utility decides to pass on the costs of Obama's "no coal" decree, well, I guess you'll just turn off the AC and sit and swelter in the summer heat...just reverse the process in the winter.

Obama has declared we are in the throes of a robust economy.  And, if we are to believe him, we must again bastardize that form of thinking into a "eat this, not that" kind of thing.  For example, the unemployment rate is low, right?  Well "eat that" and not this:  93 million people have completely left the work force and are no longer counted as unemployed!  How about that for making the problem go away?  And, even though the number of folks on food stamps have doubled on Obama's watch, everything's fine, right?

Pardon me for being a bit skeptical about the Obama rhetoric.  I prefer to believe a news item released this morning.  Our food banks all across this nation are facing empty shelves due to high demand from people who just couldn't seem to find something cheaper than "Alpo" dog food to put on the dinner table!  So tens of millions are raiding the food banks and the shelves are bare!

So, be sure and vote for a candidate next year who will promise to continue Obama's economic policies...after all things are rosy, prices are not going up, and if the government can continue not giving Cost of Living increases they'll be many fewer of them to worry about in the future!  How's that for solving that Social Security deficit!

Pardon me, I've got to go into the kitchen and open a can of Alpo...it's time for lunch for me and my doggies.
Posted by A Modest Scribler at 2:00 AM

I was actually expecting the last line to read "excuse me while I go into the kitchen and throw up".

I've had this conversation with a couple of my liberal friends (with whom I rarely discuss politics). They honestly believe the rise of the labor non participation rate is due to affluent people deciding they don't want to go to work anymore. When I bring up the massive increase in the number of people receiving public assistance, they simply say "If they can qualify for it, why not?" Both of them are Hillary supporters. They refuse to see it.

Randy, I've found liberals to be some of the most ignorant folks on earth....and they exist in huge numbers.