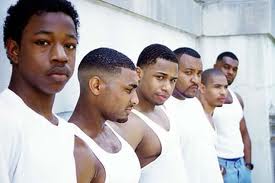 Two weeks ago Obama's Black Attorney General Eric Holder said he's not happy that 50% of federal prisoners are Black.  Accordingly, Holder plans to just let em out before their sentences are up.  And he's directed federal district attorneys across the nation to go easy on Black thugs; he advises them to work with the network of liberal judges and ask for shorter sentences for those who make their living selling or using drugs, or robbery and so on.

I agree with Holder.  At $44,000 per year of taxpayer money to feed, educate, medicate and keep entertained a federal prisoner we just can't afford that anymore.  However, I have a far different solution for reducing prison over-crowding.

Before I propose specifics, let me digress a bit and talk about how Saudi Arabia keeps their crime rate to near nonexistent and has no problem with over-crowded prisons.  Having lived and worked in Saudi for ten years, I'm not suggesting that Saudi Arabia has an ideal society...but I do suggest that they have the right idea about dealing with crime.

I remember one morning several years ago in Riyadh.  I had driven down to my local Safeway store and was doing my week's grocery shopping.  After going through my shopping list I wheeled my cart up to checkout only to find I had lost my wallet.  I was prepared to profusely apologize to the grocery clerk for their having to re-stock my cart.   Instead the clerk waived off my apology, consulted with the store manager, handed me the grocery receipt and told me to take my groceries home and bring the money next week.  I could not believe that level of trust existed in these modern times.

Happily, three days later, my wallet was returned to me by my residential compound manager; someone had found my wallet downtown and had driven a good ten miles out to my compound to return it, no questions asked, no reward expected.  The entire contents of my wallet was intact, including over $300 dollars in cash.

How does Saudi Arabia maintain a nation of honest citizens?  They do so by doling out strict punishment; punishment that a San Francisco liberal would find barbaric.

In Saudi, all rapes, murders and drug possession are automatic death sentences.  On any Friday the citizens of Jeddah or Riyadh are welcome to come to the public square where these criminals, after a surprisingly indulgent trial system, are public beheaded.   Nothing like seeing a head rolling down Main Street to make folks think twice about committing a serious crime.

Saudis handle theft a bit more tolerantly.  On the first offense of theft the offender is sent to jail.  If the prisoner is to eat well while there his family must bring food to him.  If the family does not bring food the prisoner is given either a wheat or rice based gruel that will allow him to survive but not to fatten him up.  The second offense of theft will result in having your right hand cut off at the wrist.  If a criminal is still not rehabilitated he gets a one way trip to the public square and a very sharp sword.

So, let's get back to those overcrowded American prisons.  I propose we imprison far fewer of our criminal element.  I would amend the punishment a bit from that which exists in Saudi Arabia.  I would maintain the automatic death penalty for anyone who murders, rapes or sells crystal meth, cocaine or heroin.   For other drug offenses, for both pushers and users, I would impose prison sentences but would set up effective programs designed to rehabilitate those suffering from drug addiction.

I would also impose life sentences (without parole) for anyone who uses a gun to commit armed robbery.  Un-armed robbery and other theft crimes would be punished according to the criminal past of the person, again with intent to rehabilitate the criminal.

My prison reduction program would be far more efficient than Eric Holder's.  Simply letting miscreants out of prison early is merely a political ploy to reduce those sky-high Black prisoner percentages.  Holder's own Justice Department statistics show that, within three years, two thirds of prisoners released are back in prison so Holder is really only proposing a revolving door system of prisoner return at more costs to the taxpayers.

Instead, my system will send those hard core criminals to the grave where they belong.  No further need to build those fancy big screen television viewing rooms for prisoner entertainment, no more need to build fancy gyms so the criminals can "beef up" with weight training so that they can inflict more damage to their victims.

Both Holder's "let em out early" programs, and mine, will cut the prison population in half.  I suggest mine is are more effective and will make America a safe place to live once again.
Posted by A Modest Scribler at 2:00 AM