"Social Security; A Place Beside The Road" 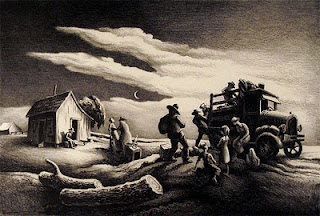 My favorite novel is John Steinbeck's "The Grapes of Wrath".  The novel relates the story of the Joad family as they flee the Oklahoma dust bowl for California, leaving behind their life's work and their heritage.

One of the most moving scenes in the novel is when the Joads, before even getting out of Oklahoma, must stop to bury an elder in the clan beside the road.  The incident seemed to serve as a metaphor for the Joads themselves; forsaking their homeland for a small chance to survive somewhere else.

The Joads, though lacking in funds, gave as much dignity and love and respect to the burial as possible.

This singular event is in stark contrast with how we deal with our old folks today.    Thanks to a Congress that, in 1965, chose to raid the Social Security Trust Fund and incorporate these trillions of dollars into the General Fund, Social Security is under assault.  Young people, bitter at the idea that Social Security might not be there for them, are attacking Social Security as just another "entitlement" program.  Never mind that those old folks paid into the fund during their entire working lifetime.  "Scrap it!", the young-uns say, "we can't afford it anymore".

Ironically, the Social Security program is on life support because of the bastardization of the program over the years.  Meant originally as an old age pension, Social Security funds must now fund green card immigrants who claim "low income desperation" and are awarded Social Security SSI; this despite the fact that, being an immigrant, they never paid into the program.

The program's survivability has become even more tenuous as Obama, in an act of political survival, has cut worker contributions to the program to "stimulate the economy" as he asserts.  Failing to fully fund the program simply for political expediency is criminal.

Obama and his regime has crippled the chances for current Social Security recipients to survive in this era of "faux inflation".  This administration, in an effort to deny inflation is occurring, has chosen to eliminate the rising costs of gas, food and medical care from the Cost of Living Index.  In doing so Obama can report that there is no inflation.  As a consequence seniors on Social Security have 25 percent less buying power than they did four years ago.

So, seniors are now tossed to the side of the road, left to fend for themselves.  They are lost in the onrush of the mob on the road, all bound for that green check from Washington.  Never mind that tens of millions of the mob are young, able to work, here illegally and have only the excuse that they are "victims", and demand Obama's largess.  It may very well be that "in heaven the meek shall inherit the earth" but here in America it is who shouts the loudest that get the green.

So, rather than tackling the difficult task of auditing social programs to identify and weed out the "gamers", it is far too easy to pick out the old for attack.  Rather than ending the debit card for fast food in the food stamp program, rather than eliminate the annual expenditure of $331 billion dollars we spend to educate, medicate and incarcerate illegal aliens, rather than withhold welfare to 16-year old "breeders", let's pick on old people.  It's easier.

How many of you realize that the average Social Security Check is less than $700 dollars per month?  Out of that $700 dollars the elder must pay (thanks to Obama) $120 dollars per month for their medicare premium (if you are on welfare..or an anchor baby you pay no premium and no doctor or hospital co-pay; you even get free dental!) even after they paid into Medicare for their entire working life!  After his Medicare premium is paid, the senior must pay co-pays when they go to the doctor and must pay hospital co-pays if they are hospitalized.  Also out of their monthly net of $580 the senior must also pay co-pay for their medicines.  There are literally millions of seniors that must choose between eating or paying for their medicines!

So, I guess what ever happens will happen.  It comes down ultimately to you;  will you continue to spend $331 billion dollars per year in social programs for illegals or will you tell your Congressmen to secure the border and deport?  Will you continue to allow teenage breeding by the victim class, who are able to work, to continue breeding..and pay for their behavior?  (An astounding 75 percent of black families are single parent households) Will you continue to allow Green Card immigrants to draw Social Security SSI even though they never paid into the system?...or will you just take the easy route and say cut Social Security and Medicare to American Seniors?   Obama already made that choice; he chose to cut $500 billion dollars from Medicare to give to Medicaid/Obamacare because that is his voting constituency.

A couple of days ago I read a story that brought tears to my eyes.  Somewhere in the mid-west, during a track meet, a young high schooler running the mile noted that a runner from the opposing team had been hurt.  The young man stopped his run and went back and picked up and carried his opponent for over half a mile to a medical station.  He then resumed his run and finished dead last.

That act of kindness is, sadly, a truly random act.  Today, the savage assertion that "I must have mine and I'll target the most vulnerable to get it" is the theme of the day.

Sadly, millions of old people have been thrown to the side of the road and are attacked unmercifully by those consumed by greed, sloth and the most expedient means possible.

Sadly, the Joads, despite abject poverty, lived in a better world 70 years ago.  The Joad elder was buried cheaply but with dignity.  Today's elders are being tossed aside and left, unburied, to the wolves.
Posted by A Modest Scribler at 2:13 AM

You speak a very sad truth. I am now very close to the age where I will be collecting my "entitlement" that I paid into my entire life. I hope it will be there. Why don't younins know this? They, too pay into it.
LBJ sickened me with his "Great Society", "and we will achieve it on the backs of the elderly". We had no choice if we want to live within the laws of the land! This is the single greatest crime of extortion ever perpetrated. I so despise this govt more and more. I know I don't have enough savings anymore to last if I live much longer than sixty five, so what is the solution? The bullet they are making illegal? I so wish people would wake up. I try and I got caught, watching all the federal grabs I narrowly missed my own state's granting illegals driver licenses. You told me about that. It's all happening so fast, not enough time in the day to keep up with our politicians destruction of our country.

Politicians are afraid of offending any one especially the illegal,unregistered(probably voting)dumbocrats.I am ready to deport tham all especially the pregnant breeders.People forget a lot of seniors are armed and have nothing to lose.My back up retirement plan might end up being a short "life sentence", for "deporting illegals and politicians.