Give Me Your Tired, Your Poor..Your Crack Merchant?

Etched in the base of the Statue of Liberty are the magnificent words of Emma Lazarus; Give Me Your Tired, Your Poor, your teaming masses yearning to be free......

With respect to American immigration are these words no longer relevant?  Has the current invasion of illegal immigration relegated Emma's words to that of empty slogan?  Is the idea that America wants and needs a replenishing supply of immigrants to refresh the American ideal of freedom no longer valid.?  Don't we need the immigrant to remind us how very special America is, so that we may not take her for granted?

I believe we do need the immigrant..but he must be of the same heart and soul of those who came before; he must truly believe that America is the land of opportunity and only asks that he be given a chance to work hard and succeed.  Sadly, in the wake of massive illegal immigration, we must now ask how to best achieve that vital influx of new Americans.

Far too many of our neighbors to the south see America as a haven for receiving social welfare, free medical care, free public education and a means to pursue tax-free working salaries.  That is true for the "best" of the illegal immigrant.  The "worst" are those who head north with bales of pot, truck beds teeming with meth and cocaine and heroin and integrate with big city latino gangs to market their destructive wares.

Contrast that Mexican immigrant profile with those immigrants of fifty years ago.  I grew up in the rich agricultural region of the San Joaquin Valley of California.  I worked along side Mexican families in the grape and peach fields.  The Mexican visitors from that time worked hard for what they earned.  At the end of the summer they were content to return to their homes in Mexico and live on their earnings over the winter.

Then President Johnson began a series of legislation called "The Great Society".  This legislation created generous welfare programs which the CBO approximates reflect several trillion dollars in government giveaways.  Free public housing, free medical care, free food stamps, nutritional aid programs for infants, preferential quota for employment hiring and education grants, all on the public dime.  Many of these programs are worthwhile and served a valuable purpose.  But the unintended consequences of these programs was to create a "victim" mentality for at least three generations of us.  Imagine, three generations of folks who believe it is not necessary to work, or be productive, to draw a check.

Unfortunately, many of these programs were not well administered and these costly benefits were dispensed to millions who were not eligible to receive them.  Enter the illegal immigrant, lured by a national plethora of government freebies under programs poorly monitored.

Even by conservative estimates at least 50,000,000 illegals have entered the U.S. over the last three decades.  Millions have created false or stolen ID and signed up for the free goodies!  Aided by a misguided Supreme Court that mandated no state may deny free education to illegal children, hundreds of billions of federal and state money is expended each year to build thousands of new schools to house the millions of illegal children.  Illegal parents, occupied with gaming the emergency rooms, food banks and welfare offices, show little interest in learning English or even seeing that their children do.  The benefits got even more "choice" when the U.S. Supreme court ruled that no illegal can be turned away from a hospital emergency room so the ER has now become the "routine care" clinic for illegal families.  Facing bankruptcy, many hospitals have closed their emergency rooms completely as a consequence.

Now, the Democrats and some 20,000,000 new illegals currently residing here are demanding "immigration reform" which is the tired old term for "amnesty".  How many of you remember how the last "amnesty" went?  We legalized millions of illegals and the federal government vowed "no mas", no more and would seal the border.  The problem is now compounded by a bastardized interpretation of the 14th amendment which was meant to provide full citizenship to former slaves but is now used as justification for the legalization of any child born in the U.S., whether the parents are legal or not. How's that been working out?  And how can we hope to get a handle on spiraling social spending costs when illegals can carry a copy of a U.S. birth certificate to any social welfare agency and apply and receive all applicable welfare programs based on that bogus birth certificate?

Perhaps, the worst consequence of the illegal invasion has been the failure of the illegal immigrant to assimilate to our core national beliefs, to develop a deep love of country, or even to learn our language.  Again aided by the liberal courts, the U.S. mandated that ballots and official government documents be printed in the illegal's native language.

The key difference between the "Emma Lazarus" immigrant on Lady Liberty and the "immigrant" of today is that they choose to invade rather than ask permission to enter.   The character of this affront is that they hold neither respect, admiration or love for a nation with a proud heritage of lifting up the downtrodden and protecting those who can't protect themselves.  They vilify the notion that hard work and fair and open opportunities are to be honored. 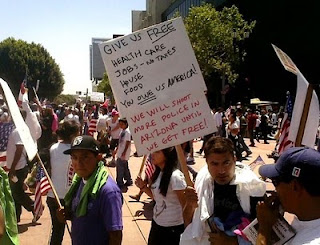 And every day we read stories like this all over the USA.  So who did we give amnesty to?
http://www.azcentral.com/community/phoenix/articles/2011/03/12/20110312phoenix-toddler-abuse-death-arrests-brk.html
Posted by A Modest Scribler at 3:00 AM

Well said. I am of course, like most americans, a member of immigrant grandparents, who worked their collective butts off. The next gen, my parents, then went to prestigious colleges (on their own merit) and now we are middle class. It is BS what illegal immigration and the welfare state have created today.

Indeed! I am quite the mongrel; Swedish, German, Irish and American Indian. I was always told mongrels dogs were smarter so I'll settle for that. Most Americans are of mixed ancestry; maybe that's part of what make us special; as De Toqueville remarked on Americans: "they live most freely in a classless society that rewards effort and frowns upon sloth", "they are a remarkably friendly people". :) Thanks so much for taking the time to visit and for leaving a comment. I value them greatly.

You value comments greatly but you delete the ones you don't like. Censorship has become common place throughout a supposed free country with the supposed right of free speech. Not to mention that you can't even do anything about these elected officials that supposedly represent the US citizen, taxpayer, constituent. America is a farce, a fraud, a big lie. Lanf of the free and home of the brave is actually land of liars and home of thieves. Back to work you go my little lamb, you have 14 trillion dollars to pay back to China. Or is it 15 trillion after a weekend of dropping bombs on yet another country under the guise of coalition of protecting an oppressed people? America = SHIT

Have never deleted a comment unless it was hate speech or vulgarity. Thanks for your comments.

Why is Emma Lazarus so great? Read Emma Lazarus in her World. Her father owned slaves at an abusive plantation in Louisiana, then dumped all the problems on his partner (although they had a generational relationship, with the sons going into business also). The sugar cane plantation that fed Emma was visited by the Negro Bureau, for abuses, and worse, the cane was grown to feed the Lazarus booze business, and run off from the cows they bred in what is now Chelsea caused contamination in milk that killed tons of nyc kids. She was a hard-core zionist that believed in Israel as a homeland for only jews, but all europeans countries for "mixed" populations. Seriously, I wouldn't use her in an article---big time slaver. Read her poems someday, and learn the history of her slave-holding family, please.

Oh, they didn't live on the plantation but had a place in manhattan most of the time. They were extremely rich with ill gotten gain, and again, abused slaves and were visited during that time by black activisst. Her dad was involved with a group that approached Lincoln trying to keep slavery in Louisiana only, to protect their "assets." Yuck! By using such a person, it's like you expose you don't know any history at all!

My God, your hate for America is overwhelming. Please provide me the location of your "utopia" where everything is perfect....then next, please tell me where "second best" is.

By the way, for anyone who believed Mr./Mss "Jew-hater", here's the Wiki on Emma:

Your beloved Ronald Reagan offered amnesty back some 30 years ago. Funny how you right wingers have such selective memory.
Agree with u on one point, it needs to stop...but it won't!

So by your thinking if something was good 30 years ago it's ok today? Get real! That's all you lefties can do isn't it? Blame everyone but your savior. For the last 3 years all I have heard is "It's all GWB's fault" and now it's Reagan? lol Too hilarious. 30 years ago was a totally different time and culture. The illegals need to be found and deported. PERIOD

You are so right azladyrider! Thanks for your comments.