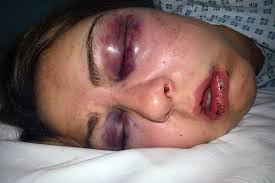 If you don't want to open the above link let me just recount the story.  A Black thug breaks into a house occupied by a stay at home white mom and her three year old daughter.  Without any provocation at all the Black begins beating the woman maliciously, with a violence that is incomprehensible.

You won't have seen this story because it did not run a thousand times over the airwaves because the mainstream media do not want to portray the national Black plague of violence that exists throughout America these days.

It is ironic that the only time Paula Deen used the word "nigger" was after being robbed by a Black thug while working at a bank.  Even more ironic, the White housewife beaten nearly to death in the above video would most likely receive massive condemnation should she, in a fit of anger after the beating, utter the word "nigger" in describing her attacker.  These two events occurred in the same week, yet Paula Deen is crucified in the press while the Black Thug doesn't even make the headlines.

We saw the same thing during the Trayvon Martin shooting.  In the same week that Trayvon Martin was killed by a "White Hispanic" (with all the expected hell raising by Jessie Jackson and Al Sharpton and Barack praising Martin as his "would be" son.) three Black thugs broke into a home in Oklahoma City, killed a 93 year old WWII vet and raped his 89 year old wife.  The brutal incident did not make the national headlines.  Three "Trayvon Martin" revenge beatings occurred in the same week, in Kansas, in Georgia and at the University of Mississippi.  Then, down in Florida an entire Black school took the day off to mob rob White owned businesses and you didn't hear a peep of condemnation from Obama, Sharpton or Jackson.

Our country is now so fucked up, so perverted, so fearful of not being politically correct that they allow the thugs, both criminal and societal, rule the day and dominate the national discussion.

To date this week we've seen a dozen of Paula Deen's commercial business partners desert her in a fit of cowardice; lest their sense of political correctness affect their business profits.  Walmart is the newest one to announce that they are throwing Paula under the bus.  Walmart...yeah, that Walmart, the one store that each year reports a "trampling death" in a Black neighborhood when Walmart announces a holiday sale on TV's or a gaming system.

American Madness..and no one in the media, or in a leadership position will speak up.

I've seen the same. This is no longer the country I grew up in.

Same thing in South Africa. White folk gets tortured before being murdered in the most grusome ways, and the media and police say its just a normal robbery. Alot of the time nothing is taken of real value.