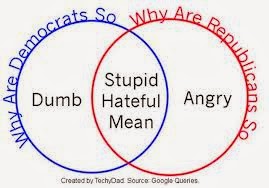 Is Barack Hussein Obama trying to destroy America by divide and conquer?  It certainly seems so.  To win elections he has had no qualms at all about setting the poor against the rich, gay against straight, Hispanic and Blacks against White and the phony Republicans "war on women".

But of all Obama's skulduggery, I believe Obamacare will be the final blow that destroys any hope for societal unity.  The unfairness of Obamacare is without precedent.  Here you have a Socialist President that has chosen to grant Obamacare exemptions for he and his staff, the Congress and all of their staff, corporations who donated generously to his campaign and favored union members.

After granting exemptions Obama then began the Communistic process of subsidizing his most avid voter blocks; 30 million tit-suckers who have lived off of the government all of their lives and are not about to begin kicking in anything for their own health care.

So where does that leave the rest of us working stiffs?  What is left for the constantly eroding Middle Class who are paying the bills?

Let's first take a look at the real costs to the average Joe.  If we can believe the stats from Health and Human Services, they allege the average monthly premium for one person will be $328 dollars per month, higher if you live in Wyoming and other less populous states.    So, a family of four will pay $1,300 dollar per month for their health care.  But wait, that's not all the middle class will pay!

You are still going to have Medicare/Medicaid taxes withheld from you paycheck.  That's to pay for old people and those 30 million tit-suckers on welfare who pay no premiums nor even a co-pay!  But that's not nearly enough so, under Obamacare, he's taking $500 billion out of the Medicare Trust fund to pay for even more free loaders.  But that's still not enough!

Obama is imposing an Obamacare tax when you sell your home, and a tax on medical devices, and a tax on sun tanning businesses and dozens of other tax grabbing gambits.  Oh, but that is still not enough; Obama is planning on an additional $13 trillion dollars in deficit spending over the next ten years to pay for the free loaders, the large army of government tit suckers and the huge bureaucracy to manage this monstrously large program.

All that adds up to a lot of money...which Obama needs.  He's added all kinds of extras in Obamacare.  For example, 500 million dollars of Obamacare funding is to to build clinics nationwide just for giving free medical treatment for illegals...until he can get them amnestied and authorized for a government handout.

OKAY; SO WE'VE DISCUSSED HOW YOU'LL RESENT THE ASSAULT ON YOUR WALLET, LET'S DISCUSS THE OTHER DIVISIVE THINGS THAT OBAMACARE WILL GENERATE:

Now, just imagine how all of those 55 and under folks like me who are healthy, rarely need a doctor, and, under Obamacare are expected to pay $5,000 dollars a year for service not rendered?  Multiply that by four for a family of four and you're shelling out $20,000 dollars a year for health care premiums...and that's before you pay rent, buy food, pay your utility bills, property and sales and income taxes and pay for the clothes on your back!

Now imagine you're paying all this money and you walk into the grocery store and you run into a grossly obese family loading up on potato chips and ice cream and candy bars and cookies, and yes, using a food stamp card to pay for them!  The kids, like 30 percent of today's youth are now suffering from obesity and adult onset diabetes and the whole damn family is running up huge doctor bills, and they're not paying a dime toward that health care!  You are!  How's that gonna make you feel?  Oh sure, you used to put up with paying for their damn cake and cookies on food stamps but how are you going to feel knowing you are kicking in $40,000 dollars a year for that welfare queen and her eight kids?

And, because Obamacare is placing such a huge tax burden on you, how are you gonna feel every time you pick up a newspaper and read that the Russian Mafia just gamed the system for $100 billion dollars in false claims, requiring even higher premiums from you!  Is that gonna piss you off a little?

Now multiply those scenarios by a thousand!  You go out running three times a week, watch your diet, get enough rest, abstain from cigarettes and excessive drink...while Joe Blow next door is a smoking couch potato and his medical costs drive your premiums even higher.  How you gonna feel about good neighbor Joe?

You think you're seeing Middle Class resentment now?  Just wait a couple of years...yeah, about the time that 2nd American Civil War starts!

My hate for that bastard is a seething one and actually occupying way too much of my time but revolution?? Well I'll show up but I think it will be a lonely war because nobody seems to give a shit anymore. I will die for my beliefs but my death will be for naught. We live in a nation populated by mtv, msnbc and david letterman children. I say children because that is the way they vote. Maybe the age of voters should be raised to 35.

So many people here on the internet bitchin and moanin about that family of pigs in the white house but where were they on election day?? If they cared so much they would have shown up and thrown those pigs out of washington and back to the chicago ghettos they spent all their youth building. No it's all over. The "Greatest Generation" is all but gone now, they behaved like adults and voted like one. Why? They had a vested interest. They're gone, it's over...C-Ya in the next life!

Remember that day in November 2007, how sad and horribly negative we were about the future? Well,it's all coming true and our mourning that morning was actually prophecy! Sorry

All true, Ken...I have read tens of thousands of Obama slams, even in the liberal papers...and sadly, if hey had shown up to vote, and not just flappin their lips, he'd be gone.

But I am so enjoying all this moaning over Obamacare premiums many from those who voted for the bastard...too bad they didn't read it before they voted!