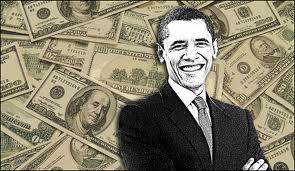 Most of us now know that when Obama's lips are moving, he's lying.  But perhaps the biggest hoax he ever visited on the American people was his 2008 pledge to be a different type of politician.  He said it was time for the lobbyists and power brokers to flee Washington.  He promised he would never host lobbyists at the White House.  Not only did he break that promise but hired a great many of them for his staff.

Then last week our liberal friends, the New York Times reported Obama's spanking new Organizing for Action (OFA), has set up a little "payola" operation whereby anyone who's willing to donate $500,000 dollars to OFA will get access to the White House with warm personal meetings from The Anointed One.  You can then "state your case" for a smart, well spoken Chicago lawyer to be your mouthpiece in support of a little "federal green" flowing your way.

Today The Hill reported that even the Liberal sponsored Common Cause organization has gotten involved to try and stop this sell out of government power and influence to the wealthy.  Common Cause President Bob Edgar was quoted as saying "if President Obama were serious about ridding the government of influence peddling he would shut down this operation immediately.

You may remember that back in January Obama and company decided that, although his runs for office are now complete, and though a campaign organization is no longer needed, that they could keep many of his toadies employed by promoting favorable media offerings that would burnish the Obama brand.  By keeping all of his cultists employed he can continue to use campaign tactics to promote his socialist programs and build his stature for history.  Who knows?  With enough donor money perhaps Obama can have his face carved into Mount Rushmore with 'the greats'!

The OFA has stated they intend to raise millions of dollars this year in an effort to promote Obama's agenda.  No doubt tens of millions will go toward demonizing Republicans and promoting massive deficit spending.

On Monday's press conference Obama's Press Secretary, Jay Carney was asked about this OFA payola program.  Carney responded with "the White House is not for sale".  However, when pressed Carney refused to deny that the big donors to OFA would be allowed White House face time with Obama.

I really cannot believe what a once great country has been reduced to. Elect the welfare state into office and this is what we get? I appreciated Bob Woodwards comments regarding obama using sequester as a reason for not deploying an aircraft carrier to the Persian Gulf, as,'a kind of madness I haven't seen in a long time'. Maybe we can have him locked up as insane. He certainly is driving me nuts!
THE WHITE HOUSE IS NOT FOR SALE OBAMA!!

Sad, Ken, but it is for sale. It's been for sale ever since they discovered all those hidden lobbyist visits last year. You may recall an investigative reporter found the White House was keeping two sets of visitor books; one for the public, and one kept private...because it was White House visits by lobbyists and Solar CEO's who were donating millions to his campaign.