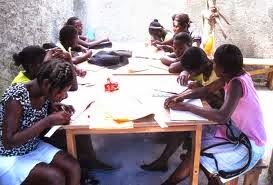 You know those humanity assist commercials where they asked you to send in $19 dollars a month to support an overseas child?  Come on!  You've seen them; they show an eight year old taking care of three or four five year olds, drinking dirty water and cruising trash cans for their next meal.

Well first of all, check Charity Watch or some other reference to make sure the organization sponsoring these commercials are legit.  Most of them are simply fronts for raking in money with as much as 80 percent of the funds they raise are kept in house to enrich these phony good samaritans.

But, that's just an aside.  For those that are legit, it seems to me they take an excellent approach for soliciting donor support.  You send in $20 bucks a month to sponsor the child and every few months you get a picture and a letter from that child telling you how grateful they are for your kindness.  They'll send a pic of a village project where they've put in water filters or freshly dug well.  That has got to be quite gratifying for an American sending in a donation.  It makes the donor feel good and encourages his continuation of this sponsorship.

How different is that from the response we receive from the seventy or eighty million American "orphans" who live off of our tax dollars!      Can you just imagine those thugs in Baltimore and Philly and Los Angeles and Chicago's south side sending us a thank you letter for our sponsorship?  And what pic would they choose to send?  Would it be a pic of their free Obama cell phone?...or would they instead send a pic of their latest $200 dollar Michael Jordan basketball shoes?

And what kind of letter would we get?  Would it begin "Hey honky!  I be tryin to guess why you stupid enough to pay all them taxes to keep us greased!  We be doin fine..mama done had her eighth kid so we been pullin in some serious Jack from Sam.  And when we learn how to trade our food stamp card for booze, beer and broads we be sittin easy!  An we all fly to Vegas every April when that big Chile tax credit check be comein in...ten grand done pay for a lot of broads, booze and one armed bandits, baby!  But fo you start feelin uppity bout sending all that Jack our way ya gotta know it ain't nothin ya don't already owe us for keeping my great, great, great, great grandpappy in chains!  Keep that Jack comin, ya Cracka!

There's an old saying, "give till it hurts"....I think, as a taxpayer, I reached that point a good thirty years ago.

Posted by A Modest Scribler at 4:55 AM

Their great great grandpappy was sold into slavery by the great great grandpappy of obama in the mother country, basically We honky's owe you nothing.I have always thought that if you collect welfare you need to earn it:clean and keep up the govt. housing you in, pick up trash and generally be a positive instead of a negative.Have a good day, slap back when you can.

Another great common sense blog!! I've noticed you don't post on Craigslist anymore. That was one of the reasons I went there, and to mess with the idiots.
Keep up the good work!

I hope everyone gets the reference!