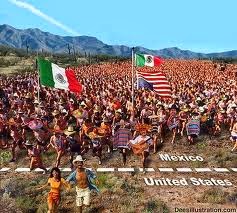 Does anyone else find it puzzling that Barack Obama is more than willing to disrupt the entire world economy over a breech of the Ukraine's border...but has no problem at all ignoring the massive breech of our own southern border?  Is there any manner of correlation between a few thousand Russians invading Crimea while more than 30 million Mexicans have invaded our own nation?

The National Review just offered an investigative report that details how Obama ordered the Secretary of Homeland Security to put a screeching halt to deporting illegals...and to do it anyway deemed necessary.  So we learned yesterday just how it was done.  It came through an innocuous Homeland Security directive that reads as follows:

Dated December 21, 2012, the DHS directive decreed that "ICE agents could act against illegal immigrants only in limited circumstances--mainly if an illegal immigrant was previously charged with a serious crime or was physically caught crossing the border."

And it seems even that proscription was ignored.  Just last month we learned that over 2,200 Level 1 felons were released by ICE.

So now we know, folks, how those 2,228 high level felons, arrested by U.S. law enforcement, and turned over to ICE, went....right back into our communities.

After reading this report, Senator Jeff Sessions, seemingly one of the few in Congress willing to deal with the illegal immigration problem, had this to say:

The effect, according to Sessions’s office, has been that many habitual immigration violators and the vast majority of illegal immigrants in the United States face no threat of deportation. “The Administration’s priorities,” Session’s writes, “have therefore provided an executive amnesty not only to the great majority of the 12 million living her illegally today . . . but to those who will violate immigration law tomorrow. It is an open invitation for a future immigrant to overstay a visa, or enter the U.S. illegally, knowing that they will be immune from enforcement as long as they avoid being convicted of a felony or other serious crime once here.”

The report also detailed how, in Texas, ICE routinely releases illegals and, in 2011, an ICE officer was threatened with disciplinary action for attempting to issue an "order to appear" to an illegal immigrant.  The report offers that this is the rule of thumb and not the exception as Obama attempts to grant amnesty to 30 million illegal immigrants through Executive Order.

Senator Sessions' staff came up with a truly alarming statistic:  Only .02 percent of illegal Mexicans are actually deported...and even that small number is attributed to the fact that those actually deported were repeat felony offenders.

So, I guess we can only conclude on thing from all this; Obama shows more concern for a border invasion over in the Ukraine than he does about our own southern border.

They ought to spend more energy on those damn oriental types. They are the most greedy and filthy out of all the scum.

Well, anon, since my wife is oriental, and since she's note dirty or filthy, and since she's worked for more than thirty years, voted, paid taxes, obeyed our laws, raised four self-sufficient children, now adults, and since she's a loving, god-fearing human being, I don't agree with you at all.

And...oh, by the way, she came here legally.

You "don't agree with you at all" based on the fact your wife is oriental. Imagine if you were married to a Hispanic. Interesting.

I am sorry to see some "anonymous" chicken shit coward personally pick on your wife. An idiots method for conversation, for sure!

Anon, if I were married to a Hispanic she would be legally here. If you're trying to imply I'm prejudiced against Hispanics, I'd be in big trouble with my family since I have lovely nieces and nephews and a wonderful sister-in-law who is Hispanic...oh...yes, they are here "LEGALLY!"

Thanks, Jerry. Anon doesn't bother me...as soon as I saw the essence of his language I wrote him off as an idiot.

Anon, don't be a dick, obviously the problem is illegal immigrants, the vast majority of which are Hispanic.

Plain and simple, illegal is illegal. It's not the nationality that the author is talking about here anon, it's the method in which they enter into America, and the lack of our Border Patrols ability to prevent it or deport them.
That's the sad part. Those Border Patrol train for their jobs and then get handcuffed and told not to do what they were trained to do, just so the liberals can gain a few extra votes.
They might have had a good run, but their time is about over.

Oh yea, when you wallow with a pig in the mud, you soon realize the more you wallow, the more they like it.