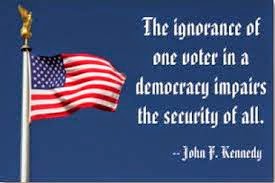 If you were to step off of your porch this morning, and find a loose board on the bottom step that sent you tumbling head first on to the walk, would you be more careful the next time you step down from that porch?

You surely would.  In fact, you'd probably grab a hammer at the first opportunity and nail that bad boy down.  That's called "history"...you've experienced something, learned from it, and you strive not to repeat it.  Doing so can be painful.

Well, I was watching another one of those late night talk shows and they were again doing their "man on the street" bits.  You surely know it...it's where they ask questions like "who's the Vice President?", "name the three branches of government"...and inevitably the majority of those street dead heads can't provide the correct answer.

And why not?  They aren't being taught civics or history, at least not many teachers are anymore.  Nor math or science or geology, or biology for that matter.  I frankly don't know when the school system collapsed.  I suspect it happened in the 80's though because I see a hell of a lot of 40 and 50 somethings walking around in total ignorance.

Back to history.  Historian David McCullough says it's a crime that schools are no longer teaching history.  I agree.  Knowing history gives us a sense of where we came from, it instills some degree of pride in our country's many achievements.  But most importantly, it warns us of that loose board on the bottom step.  To ignore history is certainly to repeat our mistakes and places our nation in grave peril.

Before Newsweek went left wing radical, and then belly up, they ran a poll on just what Americans knew about their own country.  The results were chilling.

30% of Americans could not tell you what occurred on 9/11.  60% couldn't identify the Vice President of the United States.  Another 60% could not tell you how our Constitution came to be and nearly that many could not tell you what the Bill of Rights was all about.  Several identified one of the first ten amendments as guaranteeing free health care.  73% couldn't tell you why we fought the cold war and six percent could not identify the date we celebrate Independence Day.  Only 17% could identify Iraq and Afghanistan on a map....and those that could were probably our troops who've been there.   Sadly, only 38% of Americans could pass the basic citizenship test...you know the questions:  "Who was the first President?"  "How many branches of government?", etc.

By contrast, 75% of Europeans know their country's history.   A similar poll in Britain indicates the British know more about American history than Americans.

Watch your step folks...that last one is a doozy.
Posted by A Modest Scribler at 2:00 AM

Boy, I could not agree with you more. This is beyond scary and although only 42% of us vote we really have no clue what we are voting for! Newsweek or any other magazine, few of us read and newspapers go out of business every day. It is like we don't give a shit, huh? and more on Education. I think it is also sad that Music and Dance and Theater and P.E. are also dropped from the curriculum. And Art! Leaving violence as our only self expression. A Clockwork Orange!

Isn't if funny (or not so funny), Jerry, that we were able to encompass all of those subjects in our school day, but today's kids, with all of our impressive technology, can't find the time?

The expense of teaching History is prohibitive. Every time some group or what have you demands that History be rewritten to include them or their version of events a new textbook is needed.Dig out the books from the early sixties and add updates as needed.(Not everyone or all events are worthy of being remembered)

Craig, you folks out in Mexifornia have it particularly difficult. I remember reading a couple of years ago that Sacramento has demanded that all history books include "gay, lesbian and transgender heroes throughout history".

You have brought this subject a few times in the past and each time those poll numbers have gotten worse by large percentages, further proving this county's rapid demise. It reminds me of when we watched my father's cancer kill him slow but sure and toward the end things sure went downhill quickly.

Mexifornia, that is sad but funny. I also think it sad but funny that libs sexualize history. Just a stroll up the hershy highway of history in good ole mexifornia! LOL Woops, sorry about that.

Ken, just read this morning that Gen Xers in San Diego have joined the rest of the Gen Xers in California and leaving in droves...down 5% in San Diego alone. The general complaints are high crime, suppressed wages and spiraling housing costs.

Those in the prime of life, those of the best educated are leaving California and being supplanted by illegal Mexicans who help suppress working wage levels by getting paid under the table in cash and free of taxes...the story is old and unchanging in good ole Mexifornia.

San Diego is my hometown and we go visit from time to time, not so much anymore as it is turning into a toilet. We always reference San Francisco as the epitome of liberalism but I would say San Diego is probably the the true leader of liberalism everywhere. It was, once, a bastion of conservatism but NO MAS!
I wanted to mention this little item. The man who took down obama's acorn organization just shot a video of himself disguised as a taliban or osama bin laden, from full length garb, turban and sandals crossing the Rio Grande. He was harassed by no one from mexico to inside the US. ISIS has promised attacks on the US, well these fellas have been entering unmolested for years and ignorant liberal Americans have not a care in the world. Like that one fact you mention, 30% of Americans don't know the significance of 9/11. That one just baffled me. How can that be possible, yet I'm sure it is. We are in for a very rude awakening, and given the overpopulation of the effeminate metrosexuals, I'm nervous. I wonder how many people know that russia was flying nuke bombers twenty five miles off the coast of Kalifornia up to Alaska a couple weeks ago. Get Ready, It's Comin!!

Yep, Ken...saw the faux Bin Laden crossing multiple times without a care in the world.

My mom grew up in San Diego and tells of the border crossing being a chain link fence with a gate you closed behind you.