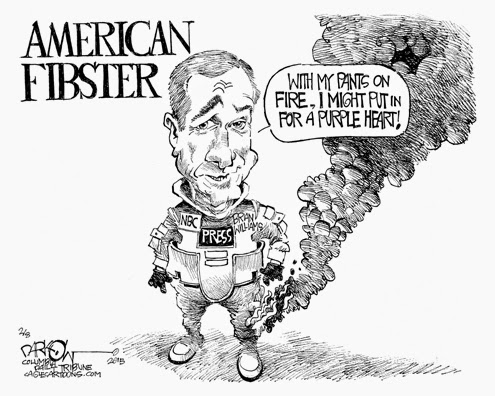 The Queen of Liberalism, New York Times columnist Maureen Dowd published a scathing indictment of NBC's Brian Williams in her column on Sunday morning.   Dowd apparently used her connections with the NBC hierarchy to report that the NBC news team have been in a dither for years over Williams "inflating his resume" so to speak.  And Dowd wonders why!  As she says, Brian Williams already had owned the anchor desk at the number 1 news show in the liberal main stream media.  She wondered what degree of ego possessed Williams to becomes such a drama queen during his reporting over the last decade.

Well, now that a bit of light is beginning to shine on Williams, we learned there were no dead bodies floating by his French Quarter hotel room during the Katrina floods...cause the French Quarter was dry as a bone.  And on several radio and late night talk shows Williams chose to embellish his "combat exploits" far beyond credible reality.

Apparently Williams is not the only drama queen at the anchor desks of our liberal main stream media.  David Muir, over at ABC News keeps his support team in stitches as he regularly unbuttons the top three buttons of his shirt to display a manly chest whenever reporting from the field.

All of this seems pure silliness to those of us who have to plow through our day and hope to create as little drama in our life as humanly possible.  But, that seems not to be true with the pretty boys behind the anchor desks.

So why do these talking heads go to such lengths to create such drama?  Well, for the same reason weather men and women stand out in hurricanes to give their weather report.   How many times have you seen those idiotic weather people standing in 50 mph winds to tell us a hurricane has arrived?  And how many of us has said "why the hell are they doing that outside?"  "Why don't they just direct the camera through a window and show palm trees bending to the waist?  Well, of course it seems more dramatic if they stand in their weather gear, their network logo pinned to their rain jacket, and sway back and forth as they bravely bring you the weather.

News anchors are no different.  It seems that, once a year or so, these idiots don flack jackets and khaki trousers and Doc Martin boots, and trot out to the war zone to report.  Never mind that the real reporting is done by lesser known journalists who grind it out every day, and are fully capable of doing a satellite remote from Kabul on nearly every evening broadcast.  Nope, the "macho journalists" behind the desk have to go out and create some real drama for the nation's viewers.

Many of us might remember a time when we did have "real" war correspondents with a "real" set of testicles.  Edward R. Murrow was right there in London when the bombs were falling in World War II.  And Walter Cronkite flew those bombing missions, and actually had to man a gun a few times, in order to report on the war.  Other journalists were imprisoned by the Nazi's for a time.  Maury Safer over on CBS was constantly out on patrol in Vietnam as were the other network war correspondents.

Alas, all we have now are pretty boys who trot out to a war zone once a year and exaggerate the degree of danger they are in...just to create a bit of drama...even as most of America have tuned them out and turned over to Fox News for a bit of objective reporting.

Brian Williams will get through this...he just announced he's taking a little time off.  He'll take just enough time for the storm winds to calm, then he'll be back doing his best Ted Baxter impression over at the "lean forward network."   NBC just signed old Brian to a five year, ten million dollars per year contract.  They won't give up that kind of money in trade for journalistic integrity.  Besides, who are they gonna get to replace him?  Al Sharpton?  Chris "piss and tingle down my leg" Chris Matthews?

Brian, he'll be off for a couple of weeks...just long enough for the anger to die down.

WHO CARES? Look at the numbers for MSM newscasts - low, and have been dropping for years. Can't remember the last time I watched any TV news - it's all advocacy and it's blatant. So, this guy lied about getting shot at? WHO CARES? BTW, $10 million dollars to read a teleprompter? God, is America a great country or what?

Randy, you are, or were an attorney, a well educated guy...so I'm a bit surprised by the consistent tone of your comments. It is always "snarky", as if you are denigrating me for writing what you yourself seem to advocate. Go be snarky to the folks causing the problem, not the people who are identifying the problem.

Perhaps it's unintentional but it is certainly irritating for the "choir" to be preached at.