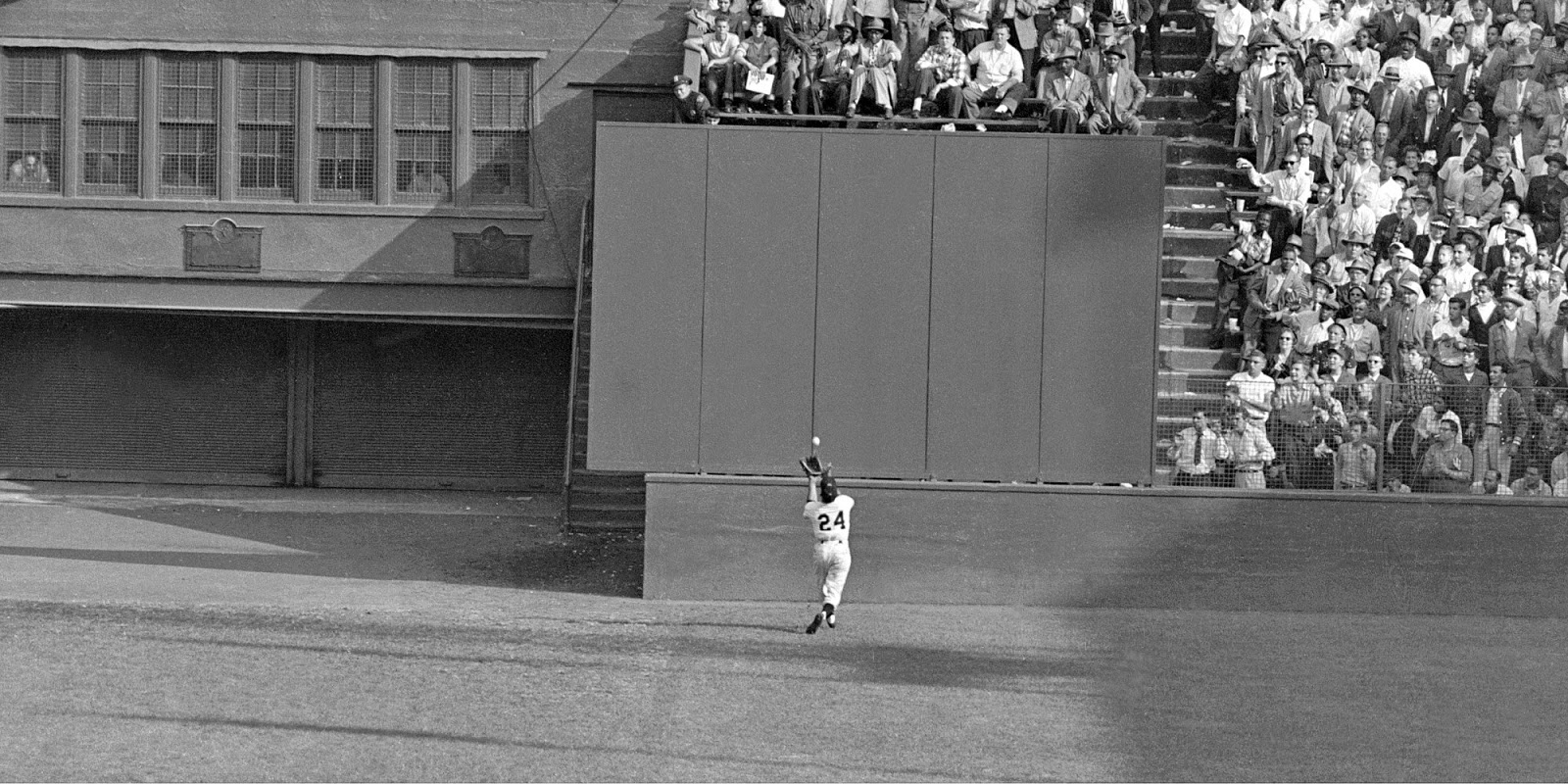 The 1954 World Series, New York Giants vs Cleveland Indians.  It's game 1, the game is tied 2-2 in the 8th inning.  The Giants pitcher gives up a walk and a hit and there are two runners on base.  The Giants manager signals the Giants outfield to play "in" so that anything hit to the outfield gives them a chance to throw the runner out at home.  So there's young Willie Mays, playing maybe twenty or thirty feet behind the second baseman.

Slugger Vic Wertz of the Indians comes to the plate.  He works the count to 2-1, then gets a pitch he can drive.   The ball crashes off his bat.  At the first crack of the bat, Willie Mays turns around and begins running as hard as he can toward the outfield fence.  Because the ball is behind him he can only track the ball with a slight glance over his shoulder.  Incredibly Willie makes the catch some 420 feet from home plate, then spins and throws back to the infield.  The crowd goes nuts and, for time immemorial, the play will simply be known as "the catch."

I've probably watched that play on U-Tube a hundred times.  It signifies to me what baseball was all about.  The "Say Hey Kid" (given that name from his exuberant greeting to anyone he met) would spend the next decade and a half roaming center field for the Giants, in New York and then in San Francisco.  It would be 15 years and 660 home runs, and perennial plus 300 batting averages before Willie would earn a $100,000 dollar salary.   Yes, you read that right.  (And only half a dozen soon to be hall of famers earned that kind of dough).  In fact, the great Giant teams of the 60's had a total payroll of $200,000 dollars, about a tenth of what a mediocre, .220 hitting middle infielder makes today.

Since Willie's catch 61 years ago there may have been more spectacular catches.  But, back then, when baseball was a White man's game, Wille was the best there was.   And no one today can match his combination of speed, power and consistently high batting average.  I miss Willie.  And I miss $3.00 baseball tickets.

If Willie had been born two decades later his name would no doubt be "Willaxer Mohammed" or some such.  He might have brought onto the field his personal gripes and his politics....and he might have been slowed a bit by a chip on his shoulder.   But, back then, baseball was played with joyous abandon and it brought pure joy to a baseball fan's heart.

So, next week, another season begins.  Some 3,000 millionaires will report to the club house, accompanied by a contingent of hangers ons...business managers, bag carriers and personal ass-kissers.

We here in Phoenix are blessed to host over half of all the major league teams for spring training.  But, if you want a decent bleacher seat you'll pay $20 to $50 bucks to get one.  A hot dog will cost you $7 bucks and a short beer will go for $6 bucks.  And, if you stand on the field where the players enter you might or might not get an autograph, depending on the mood of the player on any particular day.

So I don't go the spring training games.  I subscribe to the Major League Baseball channel and sit at home watching while scarfing down dollar hot dogs and dollar beer.  But I still love the game.  Willie Mays led me to baseball and I miss him terribly.

So "play ball", guys.  Play it with half the joy that Willie played it and I'll be happy.
Posted by A Modest Scribler at 2:00 AM

Amazing how much the worth of the dollar has gone down in the last 60 years.

Indeed it has, rimfire. But baseball salaries have expanded far, far beyond inflation. We're talking major greed here. I sometimes wonder when the whole house of cards finally collapses.

Amen Bro...More than a few wise men have predicted GREED will be the ultimate factor at the end of civilization.