Statesmanship And The Little Rock 9 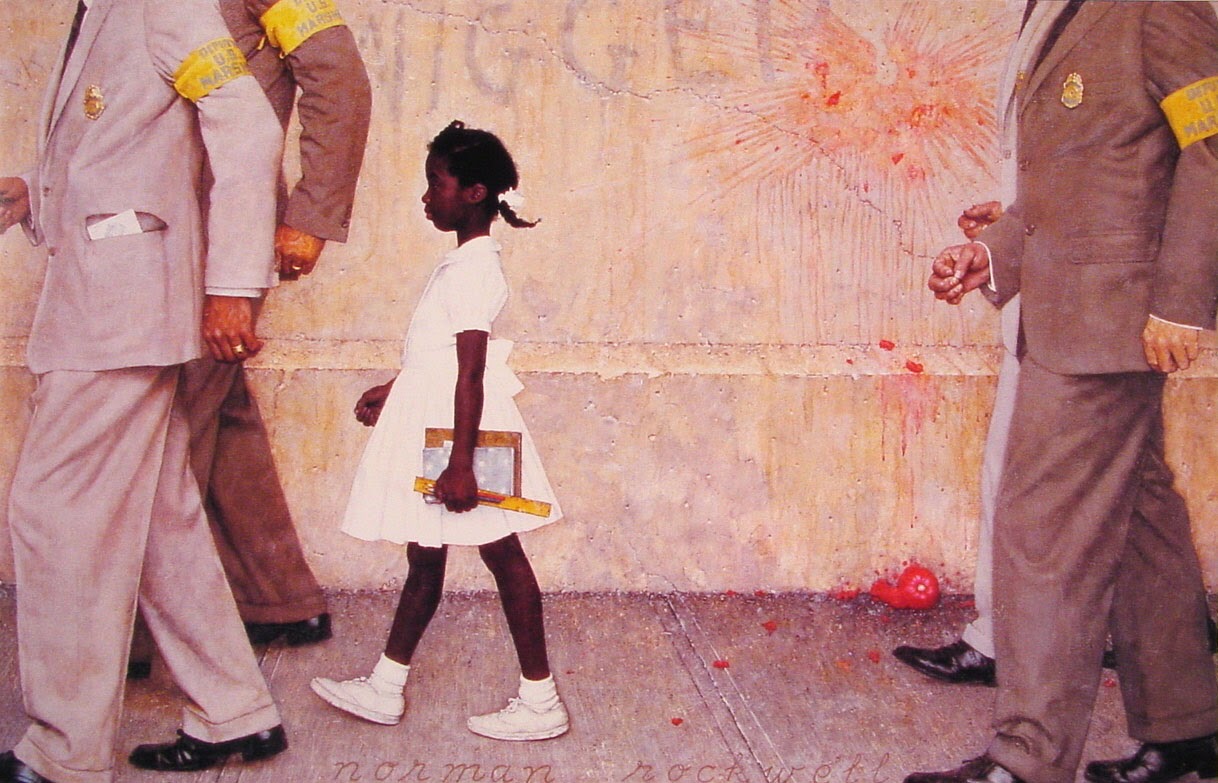 The Supreme Court ruling had been clear.  "Separate But Equal" was anything but equal, and the right to an education, regardless of skin color, would never be realized until our nation's schools were integrated.

So down in Little Rock, Arkansas nine African American children would dare to walk into the front doors of Little Rock's Central High School on a fateful day in 1957.  And there were plenty of vicious racists who were determined that they wouldn't, including Governor Orval Faubus, Arkansas's most unlikely governor, even for that state, at that time.

Faubus himself would have been deemed poor white trash in any era, having never finished high school but fortunate to feed from the trough of public office through various minor political posts and offices held.  Ironically, his first foray into the big time came when he purported to embrace Franklin Roosevelt's liberal agenda.  But for one crowd, Faubus would champion racial segregation and travel ten streets down and praise integration efforts.

Faubus was a politician whose principles floated lazily in the wind, and changed with a political convenience rarely seen, even in politics.  So, those who were screaming the loudest back there in 1957 were the racists who just couldn't wrap their arms around the idea of "niggers" despoiling their precious schools.

So old Orval, he called out the Arkansas National Guard and instructed them to bar the way of those nine children who dared to enter a white only school.  They gathered at Mrs. Bates house, a local leader of the NAACP, and fortified themselves with milk and cookies and words of courage before they set out on the short walk to the school.

And Faubus' National Guard barred the way, and even refused to provide protection against the hate filled, spittle spewing racists who threatened harm to these children.

Back east, President Dwight Eisenhower, never known as a civil rights champion, was on vacation, still recuperating from a heart attack from a few months back.  He turned on the television and listened to John Chancellor reporting the Little Rock story, and the images of little children being threatened chilled him to the bone.

Eisenhower immediately ordered the 82nd Airborne to Little Rock...though he could have commandeered those Arkansas National Guard under his own federal command, he wanted military troops whose hearts were committed to protecting children....regardless of their skin color....or who was commanding them.

And so the 82nd Airborne, some of them the same folks who had parachuted into Normandy on D-Day, arrived in Little Rock, Arkansas.  The bigots were still there, and they tried to crash the barriers, and the men of the 82nd drew bayonets and quickly quieted the mob.

That night, Dwight Eisenhower would go on national television to address the nation on Little Rock.  He would speak from his heart, without teleprompter, and rarely referring to his notes.  And he would tell the American people that, regardless of your personal views on race, the courts are the law of the land and, if we are to survive as a democracy, we must be willing to obey those laws, whether we agree with them or not.

So Dwight Eisenhower, Republican, faced down Orval Faubus, a Democrat, even in the face of the Democratically controlled "solid south" who were adamantly opposed to racial equality.  The next morning's Gallup polls revealed that those folks in the "solid south" were a bit more decent than their politicians.  63 percent of southerners saw the sincerity in Eisenhower's words, felt the empathy for innocent children in his voice, and declared their support for the President's actions.  In the rest of America fully 75% acclaimed the rightness of the President's actions.

The great Jackie Robinson, who broke baseball's color barrier sent a telegram saying "Mr. President, I knew you'd do the right thing...how could a freedom warrior such as yourself do otherwise.  Jazz great Louis Armstrong would telegraph to say "Mr. Prez, if you need me in that line down in Little Rock, just say the word and I'll come running".

But not all minds were changed, not all hearts softened...those bigoted Democrats in Arkansas would go on to elect and re-elect Orval Faubus for five more two year terms as governor.  There was still much to be done, more minds to change.  But, by the grace of God, we had a statesman as President,  someone courageous enough to brave the storm and do the right thing.

Just as seven years later it would be the Republicans who carried the water in the passage of the Civil Voters Rights Act.  "Racists" indeed.
Posted by A Modest Scribler at 2:00 AM

yes, where did those Republicans go?

They went to the same place the Dems went. There is very little courage in all of Washington. I don't know any...just giving them the smallest benefit of the doubt.

When you stand on principles you might hear a few loud voices against but the rest of the people stand with you even though mostly silent.All we need is a couple with principles and the rest will emerge.

Craig, honestly, the only one I can think of on the national scene is Dr. Ben Carson. i know of no one else.

Is it unrealistic to think that Dr, Carson could be elected President? He's not one of them(Political elite). Thinking back to the 1992 election and the large number of votes Ross Perot garnered as an Independent, maybe that would be his best opportunity? We really need CHANGE. Real change. Someone who doesn't owe anyone. That's what made Perot popular and I think the people would welcome that opportunity. Working people "get it" now. Obama has seen to that.

Or, at least they deserve the opportunity to "get it".

Frank, I don't believe our political system is yet formed for a 3rd party to succeed. There were some pretty big names that pushed for a third party prior to the last two Presidential elections...including Thomas Friedman.

So far I've not seen a single thing, or heard a single comment from Dr. Ben Carson that would cause me not to vote for him. However, I have real fear that, when you combine the millions of pure racists with those who are now very, very hesitant to vote for a seemingly attractive Black (who can forget Obama before he was elected?). I once wrote a blog about that...Obama may have killed the chance for another Black to get elected anytime soon...Obama's words and actions have created more divisiveness between economic and racial classes than any Prez in history.

"... And he would tell the American people that, regardless of your personal views on race, the courts are the law of the land and, if we are to survive as a democracy, we must be willing to obey those laws, whether we agree with them or not." Well, the courts are NOT the law of the land - laws are (or should be, before the advent of Obama) made by the legislature. Courts are supposes to interpret those laws jaw the Constitution. Jump forward to today: Obama is no Eisenhower and that's putting it mildly. Courts routinely invalidate laws based upon the druthers of a particular judge, and if we (the people) don't rise up and stand against "the law", that law will be used to subjugate us, all the while the pols will be proclaiming "liberty, freedom and the American way"...

Randy, I recommend you read, if you haven't already, "American In Search of Itself" by liberal historian Theodore White.

He, without personal judgement, covers, aside from a lot of politics, the actions of the courts from Brown vs Board of Education through the 80's. Have never read a better assessment of how activist judges created layer upon layer of government bureaucracy and the many complications those rulings caused.