"Whew!" My First Day Under Obamacare! 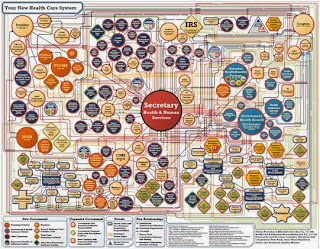 Whew!  It is early evening and, after scouring all the various online exchange information, I think I have a much better grasp of this Obamacare thing.  Thanks to the above organization chart, provided to me by a friend on Facebook, I can now clearly see how Obamacare is going to run like a fine Swiss watch.

I now realize that I was being silly to worry that tens of thousands of those bureaucratic nubs might present the smallest of chances that, somehow, they might not sync with each other, thus causing me frustrations such as my medical records being exposed, my identity info threatened by hackers, a doctor, nurse, medical tech, clinic or hospital not communicating effectively, and taking off my left leg instead of the right one.  Or that some illegal alien would steal my social security number and charge a heart transplant or two to my medical account.

Perhaps more than anything I worried that some unknown bureaucrat up there on that chart might not fully understand my medical needs and refuse to authorize treatment....or to be late in responding to my need for immediate open heart surgery.

But somehow I am comforted by all those circles up on the chart; the ones with warm primary colors, the blues, the reds, the yellows.  And thankfully the chart is made a little more simply since the President and his staff, Congress and their staffs, Selective Corporations and Big Unions are not included in the Obamacare network.

Though not shown in the above illustration, there is an accompanying legend to the Obamacare organizational chart.  It shows the five primary federal agencies that each request for medical treatment must pass through before my doctor is even allowed to don plastic gloves to examine me.  Those agencies are as follows:

1) The Justice Department to determine if I am under criminal prosecution and might be a better candidate for medical treatment in a prison facility.  Or if my medical treatment is the result of a violent assault on my person, which would then authorize medical reimbursement costs be shifted to the criminal's insurance policy...or my injuries were caused by a vehicle accident, in which case medical costs would be shifted from my federal medical account to the "driver in fault's" insurance policy.  (I'm sure this would be ironed out quickly and efficiently and would not delay my medical treatment).  And finally, the Justice Department would check to see if my medical needs occurred during the commission of a crime; if so, I would have to delay medical treatments until my case was settled in court before my case would be assigned to either a civilian doctor or one assigned to a federal prison medical facility.

2)  The Department of Homeland Security is the next step in the approval process.  DHS would check to see if I'm a legal citizen of the U.S.  If I'm legal the medical procedures will be approved and I will pay all appropriate co-pays for doctors and hospital costs, as well as my monthly premiums.  If I am found to be an illegal alien I will be directed to a free medical facility where I will be treated at no costs, thanks to a $500 million dollar allocation from Obamacare funds.

3) The Department of Health and Human Services.  Once I have cleared Justice and Homeland Security, my request for medical treatment is then passed to "the big boys"...the Department that will house the 15 judge panel of laymen who will review my records, my age, my current health profile (and, in light of the IRS fiasco, most certainly my political views) and then determine if I'm too old and too frail for the medical treatment to be cost effective.  If treatment is approved I've "won the lottery"..if treatment is denied, HHS will assign me to an appropriate Hospice for my remaining days.

4)  The next step in the approval process is the Internal Revenue Service.  The IRS will review my request for treatment, the level of medical care I've chosen with the Health Exchanges (Gold down to Bronze, bronze being a policy that covers band aids and aspirin and little else) and then IRS will determine if I am to receive any government subsidy, based on my income as it correlates with the national poverty level in the geographic region in which I am applying for treatment.  If I make more than $24,000 dollars per year, or if I am a Republican, or a Tea Party member the IRS will refuse to grant any federal subsidy and then forward a priority message to my medical facility warning them that "they're on their own" if they choose to treat me.

5)  The Department of the Treasury will monitor the overall costs of Obamacare and issue more government bonds to pay for the program costs overruns.  This year the Congressional Budget Office is projecting that Obamacare will add $13 trillion dollars to the current $17 trillion dollar national debt, which rounds to a nice $30 trillion dollars after ten years of Obamacare.  The Treasury has already deployed their best "Bond Wonks" to China, to Japan, to India and Saudi Arabia in an effort to market all those additional bond funds that will be needed to pay for Obamacare.  They have also oiled up the printing machines at all U.S. mints, fully prepared to print more greenbacks if needed.

So my first day under Obamacare is coming to a close.  I've taken my temperature rectally (since I feel the old rectum is going to get quite a workout in the next few years), I've monitored my heart rate and blood pressure, taken my Centrum Silver, and just swallowed a dose of Pepto Bismo so I don't think I'm going to need any Obamacare today....but, as Scarlett Ohara said when someone told her they didn't "give a damn"...tomorrow is another day and I just hope when I do have to go see the doc, someone gives a damn.

Whew!
Posted by A Modest Scribler at 2:00 AM

Yo, Scarlett, I just pray that when you go see the Doc tomorrow that there is still a Doc to see. Several doctors around here are retiring as result of this bastards new laws. Obamacare....cares for who, oh ya, those that could care less and live off those who do. I'm quickly learning to hate the country I have loved for so long...shit. To quote a Great Man, "Sad, damned Sad"

Ken, we have the same thing here; some docs are retiring or leaving practice...many more are just refusing to take Medicare/Medicaid patients....and I'm sure many exchange patients as well.

We have even see a couple of doctors convert to "cash only" and are discounting their services to stay away from any government program.