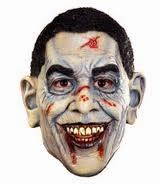 Well folks, Halloween is only two weeks away.  Have you firmed up your plans yet?  Gonna stay home and pass out the candy to the kiddies?  Going to a Halloween party?  I was just reading a little trivia news clip that rated the scariest movies of all time.  Tops on the list were "Halloween", the original "Dracula" film from 1939 and of course "The Exorcist".  Lots of folks will stream those movies on Halloween night.

But if you really want something scary go to one of the internet sites that have taken the time to sift through the 2,300 page Obamacare bill, then summarizes Obamacare's main features.  When you see how dramatically it downgrades our current healthcare system you're going to have chills running up and down your back.

Perhaps most frustrating are the inequalities built into the program.  It reeks with concessions to liberal causes and slays those who may choose to follow a more open and transparent approach, a system that provides the greatest personal latitude for personal decision-making.

Here's a few features that send the liberal "nanny-staters" into intense orgasms.  If you smoke Obamacare automatically increases your health care premiums by 50%..but if you practice irresponsible sex behavior, if have gonorrhea, or herpes or the AIDs virus you cannot be charged a single penny more in premiums than any other healthy adult.  While a smoker has a 15% chance of getting lung cancer, fully 100 percent of AIDs patients will cost the health care system hundreds of thousands of dollars in doctor and hospital costs and a life time of AIDs medicine can cost in excess of a million dollars over an AIDs patient's lifetime.  But, hey, ya gotta take care of those who voted for you, right?

Another problem with Obamacare is the way pain is defrayed until the program is set in stone and can never be repealed.  For example, Obama purposely "front loaded" the benefits and saved the pain for when he's no longer in office.  For example, allowing children to ride their parents health care plan till age 25 was great for some.  Even the first and second year penalties for not enrolling are fairly mild; the first year's penalty for failing to enroll is $95 bucks, or 1 percent of annual income....but look at the fine for not enrolling three and four years from now!  You'll pay thousands of dollars in penalties for failing to adore Obamacare.

Six months ago I wrote about how the software program for Obamacare was proving to be a nightmare.  In the last two weeks as sign up success rates average only one percent of those trying to enroll.  Even worst, the Obamacare program was supposed to run an IRS cross-check when enrolling...however this nearly billion dollar program has never been able to get the IRS computers to talk with the Obamacare computers.  So what did the government do?  They waived it!  Obama has directed that people can sign up for Obamacare, without having their income verified to determine how much Uncle Sam will subsidize your plan!  Obama directed Health and Human Services to "just rely on the applicant's personal honesty!"  Are you kidding me?  Would that be the same "personal honesty" that allowed the Russian Mafia to scam Medicare and Medicaid for over a billion dollars over the last three years?  Will that "personal honesty" be the same one that drove hundreds of Blacks from trying to buy $700 dollars worth of food with a food stamp balance of .49cents this week?  Will it be the thousands of Katrina victims who scammed FEMA for billions of false damage claims?

Note:  The Republicans, in negotiations this week, are trying to add the requirement of "income verification for Obamacare to the the current budget resolution but the Dems are fighting tooth and nail to keep it out....just as they battle to keep "citizenship verification" out of the voting process!

There are dozens of provisions in the Obamacare package that were clearly written with politics in mind, to favor liberal constituents while crucifying those with more traditional American values.  Laws are supposed to be written that provide equality for all...this one doesn't.

Seriously folks, if you think a little girl spewing pea soup is scary, just read a few of the detail of Obamacare!  It'll keep you up nights...hell you might even take up smoking to calm your nerves!

Damn, well you have just taken my free time away.Not that i think your info is wrong, now I am going to have to do the research for myself so as to document the true obummer care for the liberal morons here in CA.Any good place to start? Thanks and have a great SHIT day (Sure Happy It's Thursday)

Craig, re research recommendations, google White House.gov then read the Affordable Care Act...then there are hundreds of analyses citing the programs pluses and minuses. have fun, there's lots there to read.

Your comparison of smokers to those with venereal disease is comparing apples to oranges. The costs of smoking and smoking related diseases dwarfs that of any other single medical expenditure. Never mind that smoking and smoking related diseases kill in the neighborhood of HALF A MILLION people a year in the U.S., the sheer cost of treating those smokers that manage to live is staggering, to the tune of $30 billion a year between Federal and State direct medical expenditures. This does not even take into account the even more staggering costs of survivor benefits paid by Social Security to the spouses and children of those who have managed to kill themselves by smoking.

Anon, I of all people, will not defend smokers...however, I noticed how you "cherry=picked" the least of what I mentioned, gonnahrea, and chose that to compare apples to oranges, as you say.

Please don't talk to me about smoking while totally ignoring the millions of people with AIDS who suck a million bucks per person in care and medicine. The cost to care for smokers is minute compared to those with AIDS...those who also had a choice and chose wrong.

Hell, there's all kind of waste in medical care...every time a woman gets knocked up she gets to take three months off with pay..and now some are even giving fraternity leave as well!

And we issue food stamps, then authorize them to be used for fast food so we can fatten up those who need government help the most, then we give them free medical care to treat their obesity and type II diabetes and heart problems.

This is all very bizarre to me. Why even look at the law when we know we can't afford it. This morning on the news the message was "things are looking up now that the unreasonable obstacle to raising the debt ceiling has been removed". This is the exact opposite of reality. The message should be "in another setback to a sustainable future, the House gave up its fight to reign in government's outrageous spending spree." Frankly I don't care if they fund obamacare or not. The budget must be balanced. The only reason we have this fight over ACA is that there is no expectation that we even HAVE a budget. The rest is just details. Let them borrow money and they will argue over where to spend it, but they will still spend it. Obamacare will be the same as social security, it will just collapse sooner. We'll all pay but get no benefits.