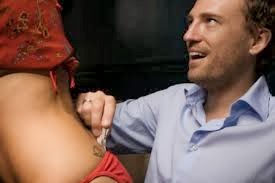 Let's say my wife was going over last month's household budget, finds that our spending is exceeding our income and begins looking for places to cut back.  In going through the check book she finds that I've been hitting the ATM up every Friday night for a hundred bucks.  When she asks me about I tell her that my Fridays are my night out with the boys at the local strip club.  She sternly notes that the $400 dollars per month I'm spending on booze and lap dances is nearly 20% of our income.   Well, being open minded, the old girl tells me that, though she knows I really enjoy those Friday night lap dances, that I'm going to have to fore go them until our income catches up to our outgo.

I am naturally furious at this notion!  When I finish up work on Fridays I enjoy being the "bell of the ball" as I drop a tenner into the panties of a lithe and lush twenty year old every few minutes.  I'm very popular with all the girls down at "The Final Lap" and just am not going to give up my popularity down there.  The old girl then stomps her foot and tells me if we are to live within our budget the lap dances have to go.  I then threaten to declare bankruptcy if she won't allow me to have my lap dances.

Well folks, the threat of default is not so much different than that scenario.   President Obama has presented a budget of $3.6 trillion.  This budget exceeds our $2.8 trillion income by $800 billion dollars.  The Republicans, the only grown ups in the room for the last four years, are insisting that Obama cut back on spending to bring the budget closer to being in balance.  Barack is furious over this.  He threatens Congress with a government default if he can't get all that he wants.

Sadly, many of the things he wants to spend on are simply money thrown out to boost his popularity, a veritable "lap dance" to his electorate.   For example, each April Obama issues checks in the amount of $12 billion dollars to give illegal aliens Child Tax Credits, even for their foreign born children.  An even large expenditure is the $500 billion to provide Obamacare subsidies to his best buds.  Eight percent of the entire budget will go to Medicaid, a program which provides free health and dental care to some 40 million "career tit-suckers"...and he won't even mandate a co-pay for doctor visits or hospitalization.  And, of course, as part of Obamacare funding,  Obama and the Dems have passed legislation that will spend $500 million over the next five years to build free medical clinics for illegal aliens who do not qualify for Obamacare... until he can bring them amnesty.

And let's not forget that Obama has run up $5 trillion dollars of additional national debt, bringing the total to $17 trillion, with annual interest on that debt approaching 33% of all tax revenue!

So like the fella who enjoys his lap dances, Obama enjoys the adoration of those whom he bestows free medical care, free housing, WIC, Food stamps and free cell phones upon.  He's just not going to give up giving money away.

So Barack threatens to default on the interest payments on our national debt if he can't have his "lap dances".  And he's not going to give up his White House dinner parties, or his trips to Martha's Vineyard or his annual Christmas trips to Hawaii or even his $100 million dollar Africa trips!  In other words, if he can't have it all he's going to "soil his..and our nappy!"

It's those damn lap dances that are holding up negotiations!  Just as Obama cancelled White House tours for school children during Sequestration...even as he warned the world would end if it went into effect!....Just as Obama has rousted old vets from war memorials and old people from their homes on federal lands, even tried to shut down private businesses, he is now threatening to "expand the hurt" by not paying out military salaries, or Medicare payments, or Social Security pensions if Congress tries to take away his "lap dances".

There is absolutely no truth that we need to default on any essential program; not with that $250 billion dollars rolling in to federal coffers every month!  But, sadly, this man child who occupies the White House suffers from frequent snitt fits.  Like the kid in the supermarket refused the candy bar, he's throwing a huge national "tantrum" and working like hell to rescue those "lap dances"

Addendum:  If you go to the White House's own site you can view Obama's budget.  Under the White House's own modest estimates, by this time next October the national debt will increase from the current $16.7 trillion dollars to $18.4 trillion, including the new deficit spending and accrued interest.

What a baby! IO'd rather he spent the money on actual lap dances. It would help out single mothers that are citizens.

This sure gets the blood flowing thru me......gears me up for a productive day! Thank you again, I say sarcastically. haha! But really, I do enjoy your writings & they do get my blood a flowin'!

Craig! What an unusual logic ya got going there! Brilliant! Helping out the economy and keeping single mom's off the welfare rolls!

Good for you, Carol! Now go out and slay some dragons!