I Suffer From PTSD 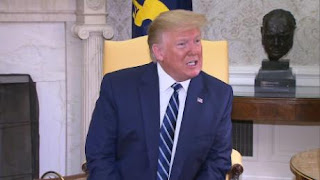 I would first like to thank "the old reliables" who responded to my last post.  Your comments were thoughtful and clearly supported by your personal beliefs.  Alas, I would remind my readers that, during the last election, it came down to the very last before I pulled the lever and voted for Trump.  I pretty much despised the guy, my distaste for Trump exceeded only by my hatred of the corrupt Hillary Clinton.

Next time around I'm just not sure I can swallow that bitter pill, no matter the threat from the Left.  I may have to vote Libertarian and let the rest of you sort it all out.

While channel surfing on Sunday morning I came across former Reagan staffer, Peggy Noonan, characterizing the Trump era.  She equated Trump's Presidency with that staunch plate spinner on the old Ed Sullivan show.  That guy would spin six plates on sticks, then work furiously to keep them all spinning.  Noonan said Trump's performance has caused many of his former supporters to exhaust themselves in the Trump "Harem Scarum" school of leadership.

That best describes my own feelings.  I am suffering from "President Trump Stress Disorder (PTSD).  I am tired of his lies and gross exaggerations.  I'm tired of his making every single national issue a referendum on himself.  But most of all I'm tired of his gross failures in bringing solutions to a whole host of problems, made even more problematic by his hateful Tweets and dialogues.  I could suffer Trump as long as he was successful.  Tragically his massive ego and ungoverned blatherings make it almost impossible to succeed now......from his Jekyl-Hyde non-response to Iran's aggression, to his poisoning the legal well where jurists have to sift through Trump's spewing of ethnic hatred before issuing  a verdict.  For example, the Supreme Court is now wrestling with the issue of the Census Bureau asking the citizenship question on the next census.  While the majority of the court seem to want to follow judicial precedent (that question has been on many previous census forms), at least some of the Supremes are concerned that Trump is using the question to ethnically intimidate.  Had Trump kept his mouth shut the citizenship question would never have been an issue.  We see many other immigration issues coming before the court, with Trump's hateful spewings taking precedent over the legal issue at hand.

Finally, as I wrote last week, I believe Trump's usefulness to true conservatives has passed.  His signing of budget programs without his wall money was indicative of his own weaknesses.  Same thing when he signed the disaster relief bill without wall money...as if that southern invasion does not constitute disaster also.  Then, this week, as our military was set to rain thunder on Iran's missile launch sites, Trump calls off the attack....and for the lamest excuse....that he didn't want to be responsible for 150 deaths.

Hey Donnie, that happens to be a Commander In Chief's highest responsibility.  If you can't bring yourself to kill a few Iranians, step down and let Mike Pence take the helm.

So, sorry to my Trump supporting friends.  Trump's "maverickism"  has run its course and I am suffering from PTSD.  Pray for me.  Pray for all of us conservatives who are exhausted by Trump's "plate spinning".
Posted by A Modest Scribler at 3:00 AM

Well sir, I feel your pain. While the Trump rallies last week keep pointing to the booming economy I see no difference in my personal situation. At my present employer for 10 years, I received the smallest increase in pay of any previous January. Medical and dental benefits are worthless and at 65 I will be paying more and more out of pocket. The Trumpsters paint such a rosy picture but in the background of my mind I just feel something is very wrong. I feel like I'm in a runaway car rounding the bend about to go off a cliff. Trump got elected because many of us were so disgusted of the 8 years of Obama we overlooked his faults. He won't have that luxury this go-round.

Chicken Little's of the world unite. You see NOT bombing of Iran as weakness.I see it as restraint(that Obama didn't have, remember Libya and what happened afterward). The option to bring Iran down to it's knees Militarily is always there. Just because YOU personally didn't get the "raise you desired" doesn't mean anything, Jeff. Maybe you've "topped out" of yu pay grade. I think if one has problems with Trump, voting Libertarian is an EXCELLENT idea. Socialism(any Dem you would vote for) is a terrible option. Country would be bankrupt in less than 4 years. Plus Arizona and all border States would have more illegals than Citizens. I have learned patience my Friends. And with what Trump faces, jumping into the fire feet first is not a good idea. He's the outsider. Politicians hate him because he has the audacity to think he can run this Country without paying his dues. Congress has an approval rating of about 15%. That tells you something about what he's up against. Just keep dodging those sky boulders. They only hurt for a while.....

Sorry sir, I disagree. Not the raise I "desired" but a raise comparable to the ones the last 9 years. Trumpsters blow trumpets and sing his praises as if I was getting a 1000% increase. Perhaps I am topped out but I don't see the streets paved with gold that you do. Could I go somewhere else to work. Certainly, at a 50% decrease to start. No thanks.

Other option. You've been doing a crappy job and don't deserve the "BIG" raise. Had to do that to people many times. Just thinking out loud....