California: A Demographic That Might Surprise You.....Or Maybe Not 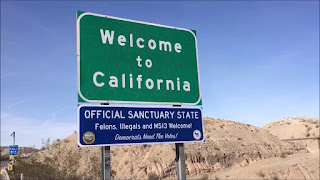 What if I told you that California has not experienced population growth in 39 years?  Would you believe that?  Well, I did a little research and found it's absolutely true.  Let's break it down, shall we?

In 1980, the year that the Census Bureau noted a startling increase in the migration of illegal immigrants to this country, the population of California was 23.67 million.  Today California has 39 million people living there.  Numbers USA says that of those 39 million California residents, more than 12 million are here illegally.

Subtract those 12 million illegals from California's 39 million total and you have a net 27 million legal citizens in California.  That is almost exactly the population number from 1980.

Okay, let's now look at what Reagan's Amnesty program did to the state.  By the year 2000 we found Reagan's Amnesty (read welcome mat) was responsible for seven million more illegals coming to the Golden State.  It was about that time when California citizens began seeing the societal ills accompanying that 15 years of illegal migration.  All kinds of measures were attempted to slow the flow.  Californians tried to deny medical care to illegals, and Bill Clinton's liberal 9th Circuit Court appointees killed that measure dead.  Same thing with denying them Driver's Licenses.  Californians won at the polls, then lost in the courts.    California is now a geographic welcome mat for all of Central and South America.  In fact, the U.S. Bureau of Census says that, by the end of 2020, California will add at least three million more illegal residents!   So, please, let's quit saying amnesty does not spawn more illegals coming here.

But, hey, back to business.  While good thinking Californians were trying to loosen the hanging rope on their neck something else was going on.  California Democrats, after years of failing, finally allied themselves with Hispanics and began charging illegal immigration opponents as racists.  Soon the Dems were winning local and statewide offices.  And anytime California conservatives tried to fight the good fight, there were Clinton's black robed royals on the 9th Circuit, holding proposition after proposition as unconstitutional.

Now California is ruled by Democrats, and particularly Hispanics with political ambitions, as is the governorship, as is the courts, and the rule of law is subordinated by a kind of mob rule, the law being what liberals say it is, not what it actually is....and god help those "racists" who say it is anything else!

California, as anyone who has toured the Central Valley, or Los Angeles and its many suburbs, know that, aside from Silicon Valley and San Francisco, California a Third World Nation all on its own.  So it's not a surprise that, when you subtract that state's illegal population, California has the same population it had 39 years ago.

But look on the bright side.  When someone tells you California is overcrowded, just tell them that state hasn't seen legal population growth since 1980!

Posted by A Modest Scribler at 4:34 PM