My Life Since Cutting The Cable Cord 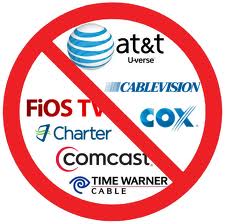 It's been seven months now since I cut the cable cord.  I can honestly say I do not miss it a bit.  In fact, after being a Cox Cable "customer zombie" for twenty years, taking it in the rear every year as they raised my rates, I feel liberated!  These days, after two decades of screwing me, and never rewarding me for long term loyalty, Cox has been sending me offer after offer, as much as half of what I was paying, if I would only come back to them.  I'm tempted not at all.

Once I dropped cable I went down to Walmart and got myself a $7 dollar indoor antenna....and discovered that I get 57 over the air channels, all of them far more crisp and clear than the picture Cox Cable was giving me.  I later learned why; Cox Cable uses their bandwidth to "split" the signal over their transmission lines so that they can cram more QVC and Home Shopping Network and a dozen religious stations and another dozen Hispanic stations, all of which I neither want or need.

After discovering the wonder of over the air programming I then went out and bought myself a little
ROKU box and began streaming tv and movies over the Internet.  As an Amazon Prime member I get thousands of free TV and movies at a cost of $79 dollars per year ($6.50 a month) and that membership includes free Kindle book loans and free two day shipments for my Amazon purchases.  I also hop on those free two months of Netflix and Huluplus, then cancel subscritpions before they get a dime from me.

So, I still enjoy watching Modern Family and two seasons of Falling Skies and discovered two seasons of the wonderful "Jericho" and watch commercial free viewings of Under The Dome....and all of this after cutting the cable cord.  My ROKU also brings me all of those wonderful PBS programs and documentaries that I always loved, now to be watched at my leisure and on my schedule.

So that I never be in need of entertainment I cruise Amazon for bargain DVD's of entire seasons of my favorite movies and TV series and, like a conductor with his baton, I orchestrate wonderful entertainment with my three chair side remote controls; TV, ROKU, DVD player. Ahh!  Freedom!

So, Cox, if you're listening...stop sending me "pimp offers" to get me to return.  Your business model sucks; you punish loyal customers with ever increasing rates and reward "newbies" with discounts...newbies that will drop you in a heartbeat as soon as you even hint of a rate increase.

Got to go now...I have a fresh episode of Modern Family awaiting me.....and I've got to balance my checkbook now that I'm saving $101.33 per month by cutting the cord.  :)

Posted by A Modest Scribler at 3:22 AM

That's too funny we dropped cable about the same time and for all those same reasons. I'm back too reading more and I love it!

Same here on the extra time for reading, Brian. And a reminder to everyone that they can be reading on a Kindle e-reader if they win my Kindle giveaway "FOLLOWER" sign up. Drawing is on 7 January and, based on the slow signups the chances to win are going to be one in a hundred or maybe even half that.

I did this three years ago. Over the air free tv is also 5.1 surround sound ... Rocks the house! Clear, sharp and sounds good too. Check out the FCC's website regarding your rights to an antenna. No HOA or landlord can stop you.

Anon, the only thing I miss about cable is, ironically, C-Span which is paid for jointly by all the cable companies....but I can even still go to that on the internet when I want to.

Have a great Sunday.

I thought over the air was going away, or had gone away. Multiple sources had said things like 'you can't get that anymore.

It just takes some hustle. we had Comcast for internet and their bill was insane. I kept calling to complain, then told them I was leaving to save 70%, they neve budged. As soon as I switched, all kinds of calls and postcards came in. It's seven times more difficult to get a new customer than to keep one, apparently they didn't get that note.

Anon, I agree...their subscription model is crazy! Reward the newbie...punish the loyal customer! I wrote a long letter to the CEO, Cox Communications in Atlanta several years ago. Miraculously, my letter actually reached the CEO! He wrote a kind letter back, then directed the Cox manager in Arizona to call me.

She did and gave me a greatly reduced deal. It lasted about two years before they began the annual hikes on me again.

The ONLY reason we still have dish is due to football and hockey! My husband; not me. We both would love to cut the cord.....if only......ugh!

Yeah, I can see having cable if you're really in to sports...but I get college games all day Saturday and three pro games on the broadcast networks on Sunday and decided that's plenty for me. Good luck on the kindle drawing, Carol...as a long time follower you are already entered in my 7 Jan drawing!

Only a week ago I read an article about this in the San Fran bay area. Where to point the antenna, etc. Some people are boasting over 130 crystal clear free channels with 5.1 surround broadcast on some. I think I will make this my project this week. I hate cable. We pay over 225 dollars a month for the crap. We stopped it a couple times but like true TV junkies we went back.

A twelve step group for cable addicts!?! That's it, I'll do that for the week after next.

Is my name in the Kindle drawing? BTW, I enjoyed your departure from all the ugliness of late. Thanks

Only a week ago I read an article about this in the San Fran bay area. Where to point the antenna, etc. Some people are boasting over 130 crystal clear free channels with 5.1 surround broadcast on some. I think I will make this my project this week. I hate cable. We pay over 225 dollars a month for the crap. We stopped it a couple times but like true TV junkies we went back.

A twelve step group for cable addicts!?! That's it, I'll do that for the week after next.

Is my name in the Kindle drawing? BTW, I enjoyed your departure from all the ugliness of late. Thanks

Ken, you can start by going on line to ROKU and looking at the channels available. Some are free, some charge a small annual fee...almost all have trial periods. Since I do most of my shopping on Amazon it made sense for me to sign up for Amazon Prime (free two day shipping, a large lending library and the Amazon Prime on ROKU which gives me a lot of free programming. Most people use Netflix at about 8 bucks a month and I understand their content is huge and free after paying your 8 bucks or so.
As to moving away from the bad news...well stay tuned this week.

And yes, Ken, you're in the drawing for the Kindle..all my old steady followers are in automatically.