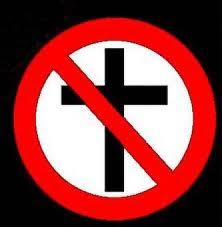 Last year one of President Obama's politically correct Veterans Affairs administrators deemed the Cross of David and the Christian Cross as obscene and not to be tolerated at military funerals.  First to implement the new policy was Arlene Occassio of the Houston Veteran's Cemetery.

Ms. Occassio issued an edict that, here to fore, all references to God, or Jesus shall be banned from military burial ceremonies.  She also banned the twice a day chiming of the chapel bells at the Houston National Veterans Cemetery and ordered the chapel closed and the Star of David, the Christian Cross and the Bible be removed from the facility.  She converted the Chapel into a storage facility and limited its use to a meeting facility for cemetery employees.

As if this were not enough, Ms. Occassio also ordered all ministers presiding over military burials to refrain from using phrases referring to God during the ceremony itself.  Ministers were told not even to use the words "God Bless" during any part of the ceremony.  Further, the term "God" or any reference to Him are not allowed to be printed on condolence cards passed out during the ceremony.

So, here we have the burial of a veteran.  A veteran who gave some portion of his life so that Americans may exercise their rights to religious freedom.  A veteran who served so that Americans may freely express their 1st Amendment rights of free expression.  All for naught now because a political liberal, a champion of the secular, has issued an edict, thus denying his family the right to honor his passing in the tradition of their religion.

Last week the U.S. House of Representatives passed a law introduced by Congressman Ted Poe of Texas.  It would prevent Obama's secular VA Administration from interfering with the religious rites of families honoring veterans with a religious burial.

The law now goes to the Democratically controlled Senate where its passage is still in doubt, lest the secular be offended by a cross, a Star of David...or a bible.
Posted by A Modest Scribler at 4:38 AM