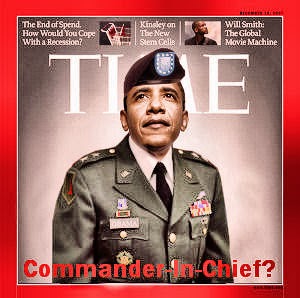 President Obama has been taking a lot of guff lately for his presumptive shutdown of war memorials.  Do not be angry with President Obama.  Just as with Bill Clinton, Barack Obama had no military experience when he came into the office of the Presidency and assumed the additional role of Commander in Chief.  Sadly, simply assuming the title does not qualify a man to fill the big shoes.

Simply look at the background of both Clinton and Obama.  Clinton was going to an Ivy League University in the 1960's.  This was the era of Bill Ayers and the Black Panthers and millions of students who didn't want to serve their country.  It wasn't cool.  Cool was smoking pot (even if he didn't inhale) and attending student protests, spitting in the faces of men in uniform and laying liberal women who promised to "make love, not war" if you'd agree to burn your draft card.  At one point Bill Clinton was a hair breath away from getting drafted (his number was coming up) so he cut a deal with his state senator only to renege when the threat of the draft receded.

So when Bill Clinton became President, and Commander in Chief, he wore the latter title with reluctance.  He often tired of saluting all of those military guards around him so often did not.  He didn't feel comfortable with all those generals in the Pentagon so he chose a political butt sucker who was junior to some 300 other officers and elevated him to sufficient rank that would provide him an ally at the top levels.  His name was Wesley Clark; yes he of the perennial candidate for President and official liberal ass kisser.

So when Black Hawk Down occurred, when those troops were battling for their lives in Somalia, and being dragged through the streets, Bill Clinton was on the golf course.  When his anxious military aid begged him to take a phone call that would have authorized a rapid rescue operation, Bill Clinton cursed and refused to take the call.  You see, having never served, Bill Clinton did not understand military honor; the absolute mandate that you do the right thing, the honorable thing, and that you stand four square behind every soldier you send in harm's way.  You don't learn that at Harvard or Yale or on a student campus.

Some 20 years later Barack Obama would refuse to launch a rescue attempt of our Ambassador and his protective troops, but for another reason entirely.  Barack and Bill's wife, Hillary, decided that they would play the Benghazi uprising as a disorganized mob rather than a full blown terrorist attack so they sacrificed four lives in order to perpetuate the fantasy of a Middle East "Arab Spring".  Again, we had a President that didn't understand military honor; that we don't leave our wounded or dead behind...and that we do everything we can to rescue them.

You see, Barack Obama grew up in the 80's.  It still wasn't cool to be in the military.  Had he served in the military he would not have been able to smoke pot and sniff cocaine, lest he end up with ten years behind bars at Ft. Leavenworth.  Nor was the military likely to give you any special treatment because of your race since we all did K.P. and walked guard duty and shined boots and pressed uniforms.  Obama, like Clinton, followed the pampered high road of intelligentsia, their next move up always guided by a politician or a government mandated racial preference.

So, as the old grunts filed off the buses last week; reveling in youthful memories of old battles, employing canes and wheelchairs to work their way toward the World War II memorial, they were dumbfounded to find yellow crime tape and short iron fences barring their entrance to a memorial built not by government but by the people of America, to include the dimes and quarters of school children from 1,200 schools across the land.

These vets didn't understand how their Commander in Chief could have deserted them after they had travelled thousands of miles for one look at a memorial built in their honor, after 400,000 of them had given their lives for the very war being memorialized.  They did not understand the mind-set of a "Presidential man-child" who, in a snit fit over budget, would shut them out.  Some might even have pondered where this country would be had Patton given up after Anzio...or perhaps marching up the Italian Boot might be too hard a thing...or if he had chosen not to reinforce at the Bulge simply because he didn't have enough gas.  Real Commanders do note give up and they certainly do not forsake their troops.

I can see where our founding fathers had concerns about who should be in charge of our military. The were trying to prevent a military dictatorship. I DON'T believe that they ever foresaw our President and Commander In Chief could be a clown. I'm sure that all prior military and ALL Americans, are hanging their heads in shame as our Clown In Chief refuses to pay death benefits to the families of our fallen combat soldiers.

Now THAT is a damn shame!

Sadly true, Marbair Patriot....and three plus years left to put up with it.