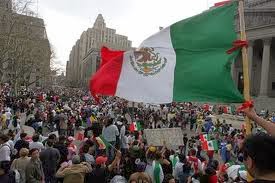 While I'm not in favor of granting you amnesty in any form, I do understand your pain.  You are terribly frustrated with your promised savior, Barack Obama, and are not just a little angry that he's failed to deliver the American citizenship which you aspire to.  Well, let's get that issue out of the way immediately; Barack Obama has failed to deliver on any of his promises, whether it is universal gay marriage, or full employment and a robust economy, or in your case, a green card.  So, let's just call Obama an equal opportunity heart-breaker, huh?

Okay, I know that does nothing to quell your anger.  You see, you come from a country where no laws are honored and obeyed, you come from a country so thoroughly corrupt that, to even get a telephone hookup, or your gas turned on, you've got to pay a bribe to someone.  Your justice system is the best that money can buy; if you have enough you can walk away from murder and mayhem.  And your country is rotten because her citizens, you, gave up on it, walked away...and even imported those same values to this country by buying entry with a pack full of marijuana or a box of kid-killing crystal meth on your back.

We Americans, on the other hand, lived under the rule of law...at least until five years ago when we fell under the spell of a Chicago politico, a politician so skilled and so ruthless and so mean spirited that many of us are wondering if the guy is not the anti-Christ of biblical legend.  Still, America is still peopled by millions of God-fearing, law abiding people who don't believe you allow law breakers like you to be rewarded in any way.  Nearly three quarters of us do not believe you should receive a path to citizenship and, if we had our way, you'd be on mule team caravan headed back to the Mexican border.

Yes, we understand why you parade down our streets and demand amnesty...again you, coming from a land of the lawless, have no understanding of our wanting our immigration laws enforced.  We understand your anger because you can't understand it, you just can't fathom a society where law breakers are punished, and not rewarded!

I've offered you a whole ton of honesty here; now I would ask for you to return that honesty by admitting the real reason you come here.  It is not to work hard and make a better future for you and your children; it is to game our social service system and fight for your place at the government tit.  Our own Health and Human Services reports that over 75% of you are on some form of American public assistance, be it through the auspices of your anchor baby or through identify fraud.  Last year alone the IRS issued checks exceeding $12 billion dollars in Child Tax Credits for which you were not entitled.  You regularly plunder our food banks, driving up in late model SUV'S and packing I-Phones, all made possible by your underground cash wages and have learned the art of commandeering WIC, Welfare, Section 8 housing, free K-12 education for your children and deeply discounted college tuition rates.

Mr./Ms. Mexican invader, let me offer you a bit of tough love.  You can march in our streets, by the millions, till the cows come home, and you'll not get amnesty.  Had Obamacare not been such an unmitigated disaster, had Obama been willing to agree to cooperate with Republicans to reduce spending, had Benghazi not occurred, had NSA spying not been revealed, you might have had the tiniest chance that amnesty would be argued this year.  Well, sorry, we've run out of time. The rest of this year will find Congress wrangling over another year of sequestration and another 'spring fling" with the debt ceiling.  And as spring arrives the political juices begin flowing in earnest as we enter a pivotal election year....where the budget and chronic unemployment and the doubling of medical premiums will be the hot ticket issues.

So march in the streets, scream if you must, throw the most violent of tantrums...but they will be for naught.  Oh, we might toughen up our E-Verify laws, we might give your children a path to citizenship if they agree to serve in the military or in a nationally recognized community service organization, but the rest of you will be left where Obama always leaves his supporters...on the outs...

Ah a president to be remembered for his oh so numerous failings. Unfortunately he's still got 3 more years to inflict his brand of damage on our country. I can only hope he's held accountable for the treason against America and her people.

This country was build on immigrants and slaves.

Mr Anonymous,
Not really, but ok, sure, most of the immigrants that came before me came LEGALLY. Filed the proper paperwork and waited their turn.
I am also native american to some degree. My family was here first. That argument doesn't fly for me that America was founded on immigrants and slavery.

Come all they want I have no problem with it...But do it legally! All Americans should go against this I was for Martin L King day voters voted against it than it was put in I was for English has our national language....when I call places I have to press 1 for that....my grandfather was German I don't speak German ...Arizona is trying to do the right thing support the law that's ALL sadly it may be too late

Mr Clancy we can only hope. Agreed, they are welcomed as long as they do it legally. Now we have to get todays message out so the "illegals" understand the American citizen's stance. And that our lame ass governments view doesn't reflect what the citizen's feel. Enjoyed todays reading, thanks.

Thank you Brian, California. Sometimes I wonder if even my loyal followers are aware that putting out a blog every single day of the year is not an easy task. And I have always hoped that those who agree with me would send my blog out to ten other people they know....that helps get the word out...that is supportive of the revolution we need to restore our country.

i write this blog because I love my country deeply, not this one...the one we had thirty years ago....we can change it if all good men and women will stand up and speak out against the lazy, the evil and against those who truly hate America.

When you look at it rationally the truth of the matter is THEY BROKE THE LAW! It was planned,calculated and in many cases paid for! How in the HELL can our Government expect to be respected or taken seriously by the rest of the world when we can't uphold our own LAWS!Well it's O.K. for you to sneak in from south of the border and tax and bleed all of our resources dry but GOD HELP the Son Of A Bitch whos educated and speaks english that comes to the U.S. and is gainfully employed but overstays his visa either intentionally or not! They will round him up in a minute and ship his butt back to the U.K.! On the other hand if you sneak in from south of the border and knowingly disregard this countries policies for LEGAL entry you are rewarded and eligible to BLEED ALL OF OUR RESOURCES DRY!To the redt of the world we are a JOKE! We have to be with our double standards and our willingness to distort the laws of our land so as to say well they apply to you and him but not to those two over there! HUH? And this makes sense HOW?

Makes no sense at all, anon. Makes even less sense to those who have waiting patiently in line for ten years, only to be co-opted by someone who walked in with a pack of pot on his back.

As a nation we are THROUGH! You can stick a fork in it!

In giving all these illegals the benefits our government so graciously bestows upon them we're only giving them the impression that we are easy and a pushover! In doing so I believe they don't take us seriously so they push the boundaries to see what else they can get away with! Why should they learn english when we so willingly cater to them! Why should they embrace our culture or take us seriously when the first thought of coming to this country is that they broke the law and we in turn rewarded them with health coverage and drivers licenses